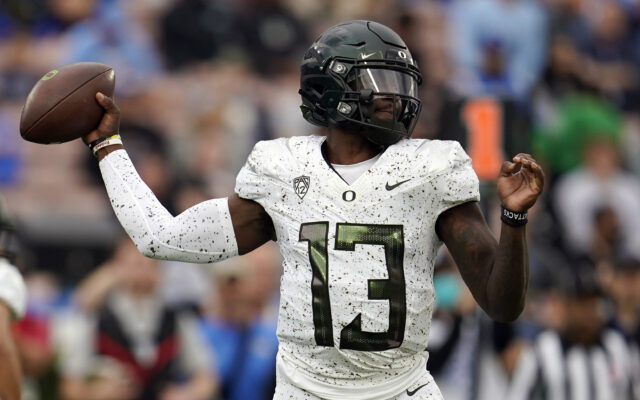 The #10 Oregon Ducks defeated the UCLA Bruins 34-31 at the Rose Bowl on Saturday afternoon to move to 6-1 on the campaign and atop the Pac-12 North. On-trend for the season, Oregon had to rely on its defense in the final drive to win the contest and unlike against Stanford, DJ James secured the game-sealing interception inside Duck territory.

Before kickoff from the Rose Bowl, Oregon closed as a one-point underdog against their former Coach Chip Kelly and UCLA. The last time they were an underdog was against Ohio State when they won 35-28. Despite unranked, UCLA was a very tough matchup for Oregon considering the Bruins are elite rushing the ball and top-10 in the country stopping the run; The former certainly manifested early when UCLA ran all over Oregon on the first drive.

After UCLA went 12 plays, 75 yards, and finished with a Brittain Brown touchdown to go up 7-0, Oregon responded by turning it over on downs when Travis Dye couldn’t pick up a fourth and two at midfield. The cheers from the fans in blue were short-lived as Oregon Defensive-Back D.J James achieved his first interception of the afternoon on the first UCLA play. Oregon created little offensively early, settling for single-digit rushing yards after the first quarter, and even after the interception UCLA blocked the punt and had excellent field position.

UCLA easily marched 30 yards after the punt block and things were looking extremely gloomy and hopeless for Oregon after going down 14-0 just 11 minutes into the game. Experienced UCLA QB Dorian Thompson-Robinson posed a rushing threat from the QB position that Oregon has not seen in over two years.

If you ignore the opening quarter and Oregon went on to look like a team worthy of a spot in the College Football Playoff outscoring UCLA 33-3 through the second and third quarters. While the defense deserves credit, Ducks QB Anthony Brown and RB Travis Dye were the primary reasons why Oregon reached a large 34-17 lead entering the fourth quarter. Dye, the main running back after the C.J Verdell injury, went on to score a whopping four touchdowns during the 33-3 run. Anthony Brown, who was booed at home last game against Cal, was superb in the middle parts of the game leading all in the contest in rushing yards with 80 and making several simple yet smart plays which emphasized why he is the starter.

Many UCLA fans began to shuffle out after a 43-yard Anthony Brown running TD made it 34-17, nonetheless, UCLA did not give up. The following four drives after the 43-yard TD went as follows: Thompson-Robinson rushing TD, Anthony Brown interception, Brittain Brown rushing TD, Anthony Brown interception. After the UCLA comeback madness, the score stood 34-31 in Oregon’s favor. UCLA had the ball at their own 46 and on that drive, Thompson-Robinson took a big hit from Kayvon Thibodaux which knocked him out of the final drive; the backup, Ethan Garbers, came in completed a massive fourth down and eight to get into Oregon territory but then made the ultimate mistake to mark an Oregon victory, an interception to D.J James.

The Ducks remain in first place in the PAC-12 North with the narrow win and face Colorado at Autzen Stadium next Saturday. Alternatively, UCLA has a tough PAC-12 South matchup at Utah next Saturday.