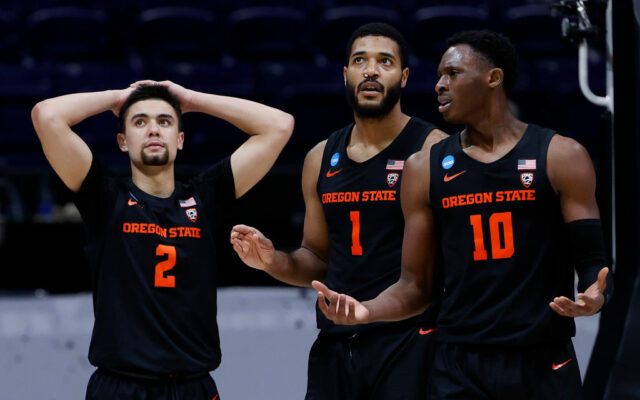 A season that no one expected from Oregon State, except maybe the players and coaches. From picked No. 12 in the conference to being one of the last eight teams playing, the Beavs were incredible this season.

Sadly, the magical run ended at the hands of the Houston Cougars, 67-61. OSU trailed by as many as 17 points before making a furious comeback.

The Beavs (20-13, 10-10 Pac-12) were able to rally, and tie the game at 55. But when Oregon State needed shots to fall, they wouldn’t and when OSU needed offensive rebounds, they just couldn’t get those either.

Houston (28-3, 14-3 American) had 19 offensive boards, which led to 19 “second chance” points even though some possessions were third and fourth chances. Now, the stats will show that Oregon State had 15 second chance points, but it didn’t feel like it.

As mentioned, there were several possessions where Houston at least two offensive rebounds. It also felt like the third chance always became a made three for the Cougars.

Neither team shot particularly well, but the timing and the kind of shots made became the difference.

Houston shot 11-of-32 from three, while the Beavs shot 6-of-16. Percentage wise, the Cougars were worse, but five more made three pointers equals 15 more points. The final score was a six-point margin.

So, what I’m getting at is, IF the Beavs had hit more of their free throws sooner they wouldn’t have needed to foul the Cougars as much in the final minute. Instead, maybe they could go for steals and play out possession in full versus needing to foul.

Alas, it was not meant to be.

The night was rough on the offensive end for Ethan Thompson. He could not get going in the first half, he had just one made FT in the opening 20 minutes.

Thompson would lead the OSU starters with 11 points. He also had seven rebounds and six assists, but he shot just 3-of-12 from the floor including 0-for-2 from three.

The leading scorer for the Beavs actually came off the bench, Maurice Calloo with 13 points.

Jarod Lucas hit a couple big three’s, but he only made one more shot beyond that. The Beavs got a balanced effort scoring — five players with at least seven points — but the margins of three’s made, offensive rebounds and free throws made was just too much to overcome.

The Cougars, aka the Midwest Region Champions, will face the winner of No. 1 Baylor-No. 3 Arkansas in the Final Four.