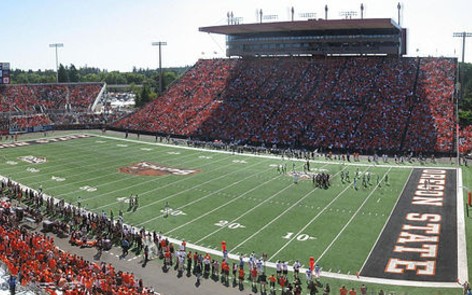 Six games at Reser Stadium and a matchup at Providence Park in Portland highlight Oregon State football’s 2022 schedule, which was released on Thursday.

Oregon State opens its 2022 slate when hosting Boise State Sept. 3. That’s followed by a Sept. 10 matchup at Fresno State – the Beavers’ first since 2003. Oregon State ends non-conference action Sept. 17 when taking on Montana State at Providence Park in Portland. It’s the first-ever meeting between the Beavers and Bobcats.

Oregon State’s first conference road game comes Oct. 1 at Utah. The Beavers then trek to the Bay Area to play at Stanford Oct. 8. OSU’s last two road games include matchups at Washington Nov. 5 and at Arizona State on Nov. 19.

– The Beavers open at home for the third time in the last four seasons.

– The matchup with Boise State is OSU’s first since 2016 in Corvallis. The teams have met nine times previously; Oregon State holds a 5-4 advantage. The Beavers are 3-1 at home versus Boise State.

– Oregon State plays its first regular season game in Portland since 1986 against UCLA when taking on Montana State Sept. 17.

– The Beavers welcome both Colorado and USC to Reser Stadium for the first time since 2018.

– Oregon State and Fresno State last played in 2003 in Fresno. The Bulldogs hold the advantage in the all-time series, 8-5, and 6-0 in games played in Fresno.

– The matchup at Fresno State is the Beavers’ first at a Mountain West Conference school since playing at Nevada in 2018.

– Oregon State plays at Stanford and Arizona State for the first time since the 2018 season. The Beavers hosted both the Cardinal and Sun Devils in 2019, 2020 and 2021.

– Oregon State and Washington both have byes on Oct. 29 before playing Nov. 5 in Seattle. No other teams have bye weeks prior to playing the Beavers.

– Oregon State opens and closes a 12-game regular season at home for the first time since 2014 (which excludes 2020 when Covid-19 forced the adjustment of the schedule).

– Arizona and UCLA are the Beavers’ two Pac-12 missed opponents.