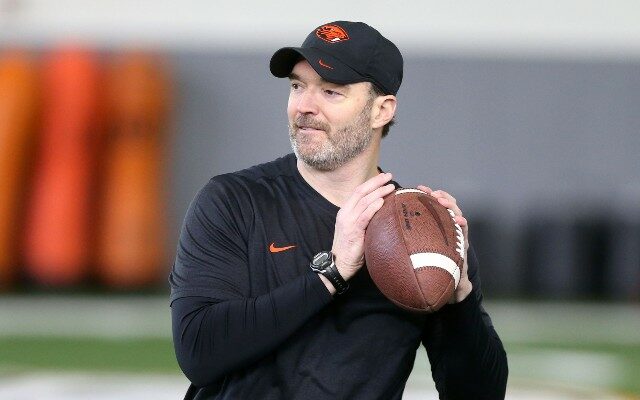 The Oregon State Beavers have parted ways with Tim Tibesar, the team’s defensive coordinator for the past three-plus seasons, it was announced Sunday.

OSU has lost consecutive road contests while on the brink of becoming bowl eligible for the first time since 2013.  The Beavs lost at Cal two weeks ago 39-25 and suffered a disappointing overtime loss at Colorado on Saturday, 37-34.

The Beavs rank 9th in the conference in yards per play allowed and 10th in total defense, and while the team as a whole has improved, the defensive unit has regressed under Tibesar in a season where there were reasonable hopes for improvement.

“After watching the season progress over nine games, it just reached a point that I believed a change was needed in our leadership on the defensive side,” head coach Jonathan Smith said in his Monday press conference.  “I got a bunch of respect for Tim Tibesar as a coach and as a person, just unfortunate that we’re not seeing the improvement needed for us to achieve the goals we want in this football team and this season.”

Oregon State turns to inside linebackers coach Trent Bray as interim defensive coordinator.  The Beavers (5-4 overall, 3-3 Pac-12) host the Stanford Cardinal (3-6, 2-5 Pac-12) this Saturday at Reser Stadium with another shot at achieving a sixth win to become bowl eligible.  That game kicks off at 2:30pm on Pac-12 Network.  OSU then hosts Arizona State on Nov. 20th (7:30pm, ESPN) before visiting the No. 4 Oregon Ducks in the annual rivalry game on Saturday Nov. 27th at Autzen Stadium.