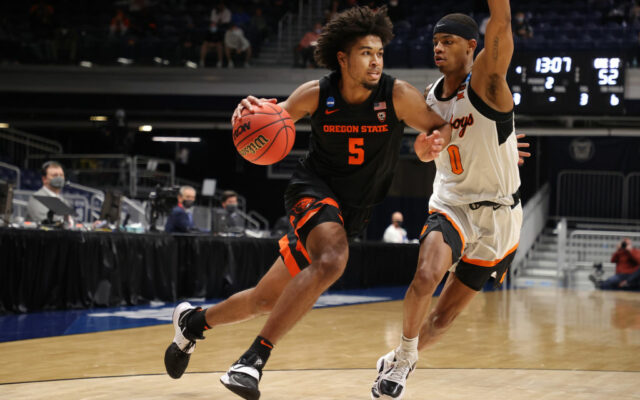 For the first time since 1982, the Beavers are headed back to the Men’s NCAA Tournament Sweet 16.

Ethan Thompson had severe foul trouble in the first half, but he made up for it in the second half. He finished with 26 points, which included a ridiculous 15/16 from the free throw line.

No. 4 seed Oklahoma State cut the Beavers lead to two (54-52), but then suddenly the Cowboys missed 11 straight field goals. During that span, Oregon State pushed their lead back to 11 (66-55).

No. 12 seed Oregon State handled their business in the first half even without Thompson. The Beavers led 44-30 lead at the break, which was the largest halftime deficit Oklahoma State faced all season.

With Thompson in foul trouble, it was Jarod Lucas and Maurice Calloo carrying the Beavs for the opening 20 minutes.

Lucas had 11 first half points, and he had 15 overall. Calloo scored all 15 of his points in the first half off the bench.

The Beavs Sweet 16 matchup will be with No. 8 seed Loyola-Chicago in the Midwest Region.