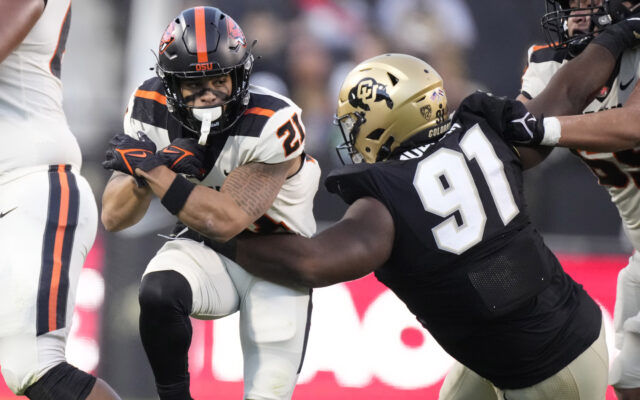 The Oregon State Beavers (5-3, 3-3 Pac-12) are still searching for bowl eligibility after falling to Colorado (3-6, 2-4 Pac-12) 37-34 after double-overtime in Boulder. Two weeks ago, Oregon State was tied for first in the Pac-12 North but after dropping to Cal last week and losing as a double-digit favorite to Colorado Saturday night, they now sit tied for third with Washington.

Colorado Head Coach Karl Dorrell mentioned to the media he has added confidence in his offense after scoring 29 against a strong Oregon Ducks defense. Colorado averaged a conference low 250 yards of total offense per game but Dorrell’s new confidence in his attack unit materialized early and often. The Buffs went on to gain nearly 400-yards of total offense, even outrushing the Pac-12s number-one rushing attack in Oregon State. Freshman QB Brendon Lewis threw a season-high three TDs while Beaver QB Chance Nolan only notched one score and an interception.

Colorado was the better team for the first three quarters and didn’t allow a Beaver lead until late in the final quarter when the Beavs went up 24-20 after a 27-yard Tre’Shaun Harrison catch-and-dash TD. Each team went through stretches of momentum but whenever a score would arise it lit a fire underneath the opposing offense.

Oregon State was impressive on the ground again with B.J Baylor and Trey Lowe combining for 158 yards and 2TDs but the duo was outclassed by speedy Jarek Broussard who surprised everyone with 151 yards, 98-yards more than his previous season-high.

On the quick final drive, Chance Nolan found Anthony Gould at the Colorado 42 to set up an improbable chance of staying in the game. The man who missed the 51-yard field goal two in-game minutes early stepped up to attempt a 60-yarder. Hayes hit the moon-kick sent the game to overtime at 27-all. Hayes’s swing of the leg was the longest made kick in OSU history, the longest in the FBS this season, and tied the Pac-12 conference game record for a kick.

Beaver jubilation lasted a smidge longer when OSU sent it to double overtime off the back of a B.J Baylor touchdown. Next drive Evertt Hayes missed a 37-yarder which allowed Colorado to simply score points to win. Colorado only secured a single-yard on their drive but it was enough for Cole Becker to hit the game-winning 42-yard field goal.

Beaver players and fans alike must now wait at least another week to see themselves labeled bowl eligible for the first time since 2013.

Oregon State will look to put a disappointing fortnight behind them facing a poor-Stanford side next Saturday at Reser Stadium. Colorado aims to earn a two-game winning streak next Saturday at UCLA.