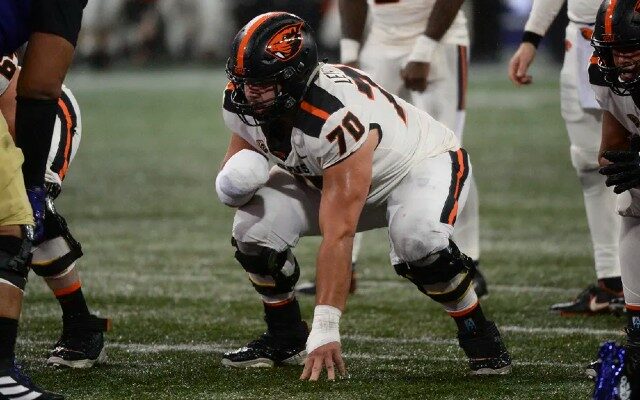 The Beavers offensive line figures again to be one of the program’s top strengths this football season, and on Friday, redshirt junior Jake Levengood was named to the preseason watch list for the Rimington Award, given annually to the nation’s best center.

Oregon State’s offensive line was a finalist for the Joe Moore Award last season, given to the best offensive line unit in the country.  Michigan ultimately won the award.

Levengood is entering his fifth overall season on campus in Corvallis, having arrived in 2018.  He has played in 26 games overall for the Beavers, making 15 starts on the offensive line, including 8 starts last season, mostly at left guard.  Nathan Eldridge was the Beavs outstanding anchor at center in 2021, but with his departure, Levengood slides over to take that role.

Levengood is a native of Vacaville, Calif., and is one of five players from the Pac-12 conference named to the Rimington Award watch list, which totals 40 players in all.  Other conference players on the watch list include Oregon’s Alex Forsyth, USC’s Brett Neilon, Cal’s Matthew Cindric, and Stanford’s Drake Nugent.

Iowa’s Tyler Linderbom won the award last season.  He was a first-round pick of the Baltimore Ravens (No. 25 overall) in this past NFL Draft.