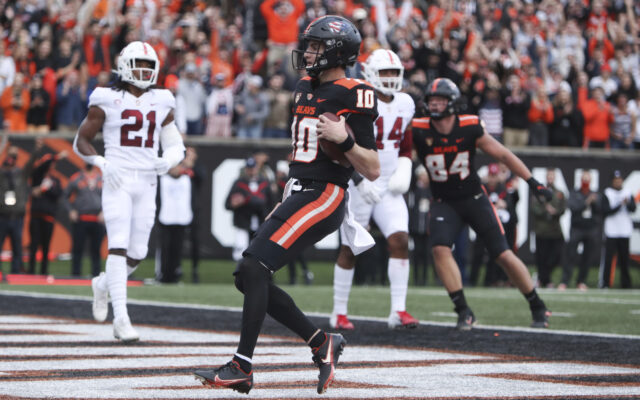 The Oregon State Beavers (6-4, 4-3 Pac-12) took down Stanford (3-7, 2-6 Pac-12) 35-14 at Reser Stadium Saturday night to snap a two-game skid. The comprehensive victory marks Oregon State becoming bowl eligible for the first time in eight years. While it’s been three weeks in the waiting, the victory, and achievement mark another significant step in the thus-far successful Jonathan Smith era.

Say it with us…

THE BEAVS ARE BOWLIN’ pic.twitter.com/fuCBgHo40e

Oregon State was much superior at home from the offset against a Stanford team that entered the worst rushing offense and defense in the Pac-12. The opening drive of the affair resulted in a Cardinal three-and-out followed by a lengthy 16-play, 7:29 minute touchdown drive. QB Chance Nolan capitalized the drive with a four-yard QB draw. Jack Colletto then doubled the Beaver lead in the second quarter when he finished off another double-digit play drive with a two-yard TD trot.

After shelving 37 points to a poor Colorado offense, Oregon State fired Defensive Coordinator Tim Tibesar. The message was received and under interim DC Trent Bray the defense was incredible: allowing zero points in the first half, coming up in big spots in the third quarter to keep momentum on OSUs side, and impressively forcing three turnovers.

The second half produced little moments of worry for OSU but when Stanford stuffed OSU on fourth down, the drive after Stanford scored, fears of the momentum shifting towards the road team arose. Momentum was short-lived as Oregon State forced a third-and-long just to intercept Stanford QB Ari Patu.

In total, Oregon State more than doubled Stanford’s total yardage 475-230 and the final quarter felt like a formality after Teagan Quitoriano hauled in a five-yard TD pass to start the fourth. After two disappointing losses coming back to Reser stadium was just what the doctor ordered, OSU is now 5-0 at home.

Next up for the Beavers is Arizona State at Reser Stadium, ASU handled their business at home in Washington tonight.