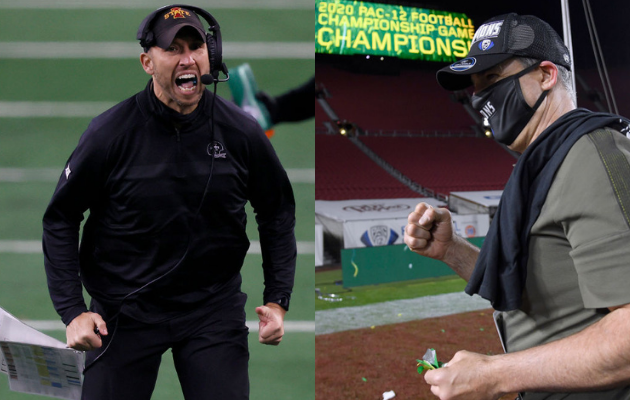 After Oregon took out USC, the Ducks learned their bowl fate on Sunday.

No. 10 Iowa State and No. 25 Oregon face off on Jan. 2 for the PlayStation Fiesta Bowl on ESPN. This will be the first ever matchup between the Cyclones and the Ducks.

With the Rose Bowl Game part of the College Football Playoff, albeit in Arlington, we knew there was no trip for the Ducks to the Granddaddy of Them All.

This will be Oregon’s third appearance in the Fiesta Bowl. The other two contests ended in Duck victories.

So, if history is any indication, Oregon should do pretty well in Arizona. This year’s game is at the same stadium in Glendale as 2013, but with a new name, State Farm Stadium.

The Ducks are looking to win their third straight bowl game, just maybe by a wider margin. In each of their last two bowl games, Oregon won by just one point.

Oregon’s last loss in a bowl game was in 2017, Mario Cristobal’s first game as the Ducks head coach after Willie Taggart bolted for Florida State 11 days prior to the game. They fell to No. 25 Boise State in the Las Vegas Bowl, 38-28.

How’re things going for Willie at FSU? Oh yeah, they’re not. He got fired mid-season in 2019. He’s now the head coach at Florida Atlantic.

How’re things going for Cristobal? He just got a six-year contract extension with Oregon.

Dodged a bullet with that one, huh Duck fans?

Iowa State finished it’s season 8-2 before losing in the Big 12 Championship Game to then-No. 10 Oklahoma, 27-20, this past Saturday.

The Cyclones lost in their first game of the season to the Sun Belt’s Louisiana Ragin’ Cajuns.

At the time, that loss appeared devastating, but Louisiana went on to be one of the best teams in the country. The Ragin’ Cajuns only loss came to unbeaten No. 9 Coastal Carolina, and Louisiana finished No. 19 in the final (pre-bowl) CFP rankings.

Before Saturday’s loss in the title game to OU, the Cyclones only conference loss came at then-No. 6 Oklahoma State (24-21) on Oct. 24.

Matt Campbell LOST IT after there was no offside call on this play 👀 pic.twitter.com/o7oyn4GH1f

Matt Campbell’s ire at the refs is making me seriously consider him for my CFB coaches’ fight club. Mario Cristobal is my first overall pick, followed by Pat Fitzgerald, but a spicy Matt Campbell could surprise everyone. You don’t mess with crazy 🤷🏼‍♀️

To be honest, I haven’t spent a lot of time paying attention to Matt Campbell, but a lot of what I found (like the above video) shows me that I know to steer clear.

This season wraps up Campbell’s fifth season at the helm of the Cyclones. His first year, 2016, the team went 3-9. Since then, they’ve gone to a bowl game each season.

Iowa State, after a 7-5 season in 2017, won in the Liberty Bowl against Memphis, 21-20. Then, Campbell and the Cyclones lost their next two bowl games.

The good news for the Iowa State is their bowl game won’t be on Dec. 28, haha. Anyway, under Campbell, the Cyclones are 34-28 in the regular season with a 1-3 record in bowls.

This game vs. Oregon will be Iowa State’s first New Year’s Six game since the Peach Bowl in Dec. 1977, which they lost to NC State 24-14.

We’ll do full predictions closer to game day, but my early opinion is Oregon will win the Fiesta Bowl.

Tyler Shough will have to continue improving, and if CJ Verdell can play I’ll feel even better about the Ducks winning.

Iowa State won’t be a pushover, but when Oregon is at their best (which I don’t think we’ve actually seen yet in 2020) they can beat a lot of teams.

Let’s see if the Ducks saved the best for last when it comes to their 2020 season.