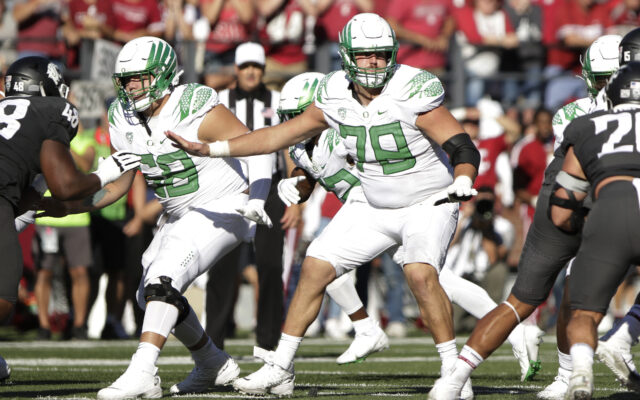 Oregon’s offensive line was announced on Tuesday as one of nine semifinalists for the 2022 Joe Moore Award, presented annually to the nation’s most outstanding offensive line.

“There is a noticeable improvement in O-line play this season as compared to what we saw last year,” said Cole Cubelic, lead sideline analyst for the SEC Network and the Chairman of the Joe Moore Award voting committee. “It’s been a pleasure to watch the effort and resilience of these O-lines over the course of the season, especially since many of them have really risen to the challenge over the last couple of weeks.”

The Joe Moore Award finalists will be named on Tuesday, Dec. 6th. The eventual winner will be recognized in the ensuing weeks during a surprise, on campus visit to the winning unit’s school.

“Like in years past, and in addition to the extensive film review and voting committee conference calls, we solicited the opinions of dozens of FBS head coaches that had personally faced many of the O-line units under consideration,” said Phil Steele, analyst and founder of the popular preseason magazine Phil Steele’s College Football Preview. “It’s been an honor to be a part of an award that matters so much to the O-line community, and we take that responsibility seriously.”

» Leads the nation with just two sacks allowed and is the only team to allow fewer than five sacks this season.

» Tied for fourth nationally for the fewest tackles for loss allowed (36.0).

» Zero TFLs allowed vs. Arizona, the first time UO has not given up a TFL in a game since 2010.

» According to PFF, Oregon has allowed just 50 pressures, 43 hurries and six QB hits all season.

» Three Ducks have combined to win four Pac-12 Offensive Lineman of the Week awards, most in the conference.

» Alex Forsyth ranks third among all Pac-12 O-linemen and fifth nationally among centers with a 87.5 pass-blocking grade from PFF.

» Five offensive linemen have an overall grade of 70.0 or better from PFF.