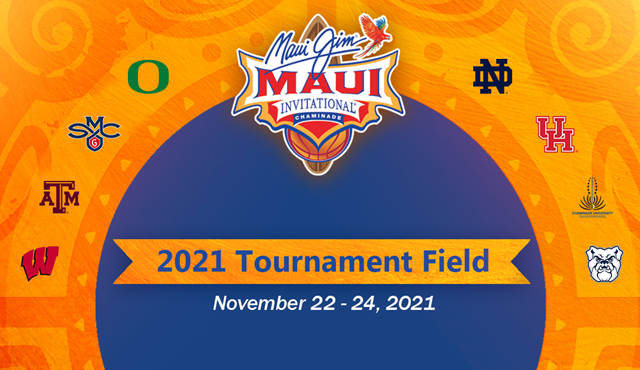 The Maui Jim Maui Invitational Tournament announced the 2021 field on Friday, and the Oregon Ducks will be there Nov. 22-24, 2021.

Oregon will be making it’s third appearance in the tournament where they are 3-3 overall. The Ducks went 2-1 in their most recent venture (2016) with wins against Tennessee and UConn, while losing to Georgetown; the 2016 Ducks went on to the Final Four that season. In 2008, Oregon went 1-2 with a win over Alabama and losses to North Carolina and Texas; the Tar Heels won the NCAA Tournament in 2008-09 season.

The 2021 Maui Invitational will feature the Ducks along with Butler, Chaminade, Houston, Notre Dame, St. Mary’s, Texas A&M and Wisconsin. Four of the 2021 teams–Oregon, Wisconsin, Houston and Butler–finished the 2019-20 (COVID-19 shortened) season in the AP Top 25. Oregon and Notre Dame are in the Top 35 winningest programs in men’s hoops.

The Ducks have played each of the other teams, except for Butler and Chaminade. Oregon and Houston split their meetings over the last two seasons, where each team won at home. The Cougars visit Eugene during the 2021-22 season. Houston leads Oregon all-time 2-1.

The last time Oregon met Wisconsin was when the Ducks upset the Badgers in the 12-versus-5 opening round matchup of the 2019 NCAA Tournament. Wisconsin is 5-3 against Oregon all-time.

Texas A&M and the Ducks have only faced off once, the 1970 Bluebonnet Bowl Classic in Houston. Oregon won 94-70.