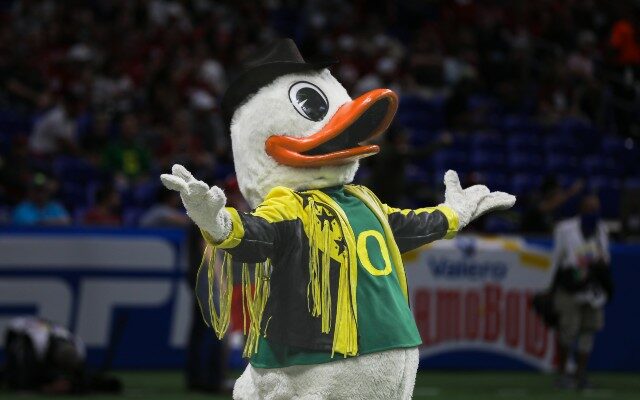 The Oregon Ducks trailed Oklahoma 30-3 at halftime of the Valero Alamo Bowl on Wednesday night, and while UO put together a strong second half rally, it came up short as the Sooners pulled out the 47-32 win.

Oklahoma’s Kennedy Brooks had his way on the ground for the Sooners, totaling 142 yards and three touchdowns on just 14 carries, earning player of the game honors.

Both programs were led by interim coaches, with receivers coach Bryan McClendon guiding the Ducks in the wake of Mario Cristobal’s sudden departure to Miami earlier in the month.  Legendary former Sooners coach Bob Stoops made a return to the sidelines to lead Oklahoma to victory following Lincoln Riley’s decision to take the head coaching job at USC.

Oregon came into the game a touchdown underdog, and while things were tight in the first quarter (Sooners led 6-3 after the opening period), Oklahoma broke the game open in the second quarter, outscoring the Ducks 24-0 en route to the 30-3 halftime advantage.

The Ducks responded by scoring 22 points in the third quarter to make the game respectable, but despite four consecutive touchdown drives from the Oregon offense, the Oregon defense could not stop the Sooners attack, allowing two touchdown drives and a field goal in the second half.  Oregon got within two scores at 47-32, but could not get any closer.

With the loss, the Ducks fall to 10-4 overall on the season, a season that saw the highs of beating Ohio State on the road in Columbus, earning rivalry wins over Washington and Oregon State, and winning the Pac-12 North Division for the third consecutive year under Mario Cristobal.  But there were also low moments, most notably the two blowout defeats to Utah that first ended Oregon’s College Football Playoff hopes, the second shattering Rose Bowl dreams, and ultimately ushered Cristobal’s departure to Coral Gables.