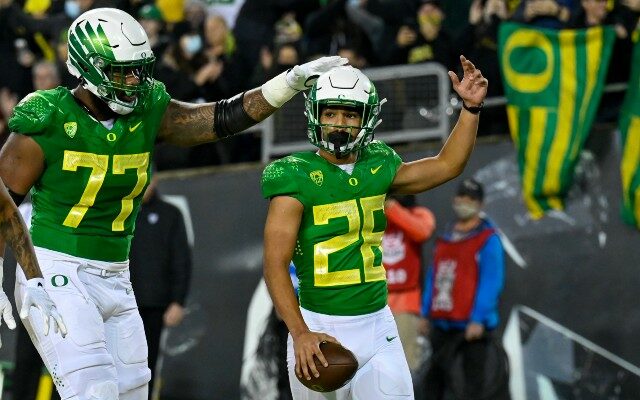 The Oregon Ducks stay at No. 3 in the latest CFP Rankings ahead of Saturday's showdown at No. 23 Utah (AP Images)

There were no changes to the top four of Tuesday’s College Football Playoff rankings reveal, the third edition of the CFP poll of the season.

Fresh off a 38-24 home win over Washington State, the Oregon Ducks remained at No. 3 in the rankings, still one spot better than Ohio State, whom Oregon beat in Columbus back in Week 2.  The Georgia Bulldogs remain No. 1 with conference rival Alabama at No. 2. Group of Five leader Cincinnati stays at No. 5.

The Ducks debuted at No.4 in the rankings two weeks ago, beat Washington and rose to No. 3 the following week thanks to a loss by Michigan State.  It’s the highest CFP ranking for Oregon since the 2014 season, when they finished No. 2 and won the Rose Bowl/CFP Semifinal before losing to No. 4 Ohio State in the national championship game.

Utah, Oregon’s opponent this Saturday, rose a couple spots to No. 23 after being No. 25 a week prior.  The Utes are a 3-point home favorite.  The Utes and Ducks are the only Pac-12 teams in the CFP rankings.