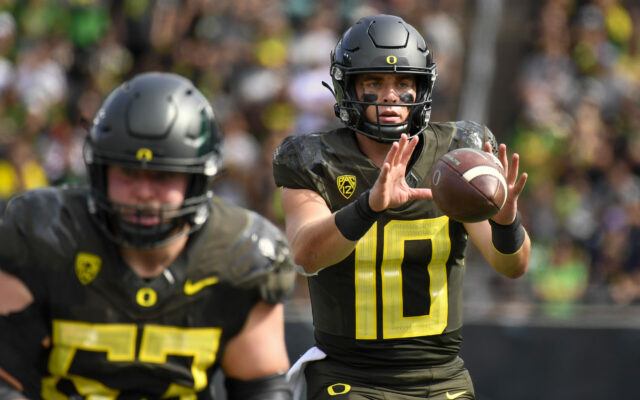 Oregon quarterback Bo Nix (10) takes the snap while running a play against BYU during the second half of an NCAA college football game Saturday, Sept. 17, 2022, in Eugene, Ore. (AP Photo/Andy Nelson)

The Oregon Ducks rise to number fifteen in the AP Poll for Week 4 of the college football season following their 41-20 win over BYU.

The Ducks opened the season at No. 9 in the poll, then fell completely out of the poll after their blowout loss to Georgia, then cracked it at No. 25 after beating up on Eastern Washington, and now find themselves at No. 15.

Oregon is 2-1 overall and visit Washington State (3-0) on Saturday in Pullman in the conference opener for both teams.