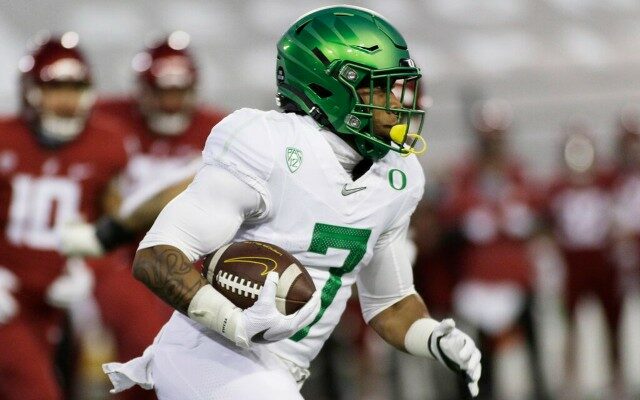 Oregon Ducks running back CJ Verdell is about to be a former Duck.

Verdell announced Monday on social media he is keeping his name in the NFL Draft and will not return to Eugene for a fifth season.

“’For I know the plans I have for you,’ declares the Lord, ‘plans to prosper you and not to harm you, plans to give you a hope and a future. ‘” — Jeremiah 29:11. pic.twitter.com/bHDpVYFgzg

“The memories and friendships that I have made over these last five years are ones that I will cherish and carry with me for the rest of my life.  With all this being said, I have decided to declare for the 2022 NFL Draft.  From the bottom of my heart, thank you Oregon.”

As a freshman in 2018, Verdell rushed for 1,018 yards and 10 touchdowns, then followed that with a sophomore season in 2019 that totaled 1,220 and 8 scores, helping Oregon win the Pac-12 Championship over Utah (where he was game MVP) and then the Rose Bowl over Wisconsin.

Verdell’s 2020 season as a junior was the Covid-shortened year, limiting him to five games, but he still averaged 4.4 yards a carry.  This past 2021 campaign, as a fourth-year junior, Verdell helped the Ducks upset then No.3 Ohio State on the road, highlighted by his 77 yard scamper in the third quarter.  Verdell finished with 20 carries for 161 yards on the day, averaging 8.1 yards a carry in one of the greatest road victories in program history.

Verdell suffered a lower left leg injury in Oregon’s overtime loss at Stanford in October.  The injury unlimitedly required season-ending surgery, and would be the last time Verdell suited up in the green and yellow.

Verdell finishes his collegiate career as the sixth-leading rusher in Ducks history, with 2,929 yards in four seasons.  His 27 rushing touchdowns are seventh in program history.