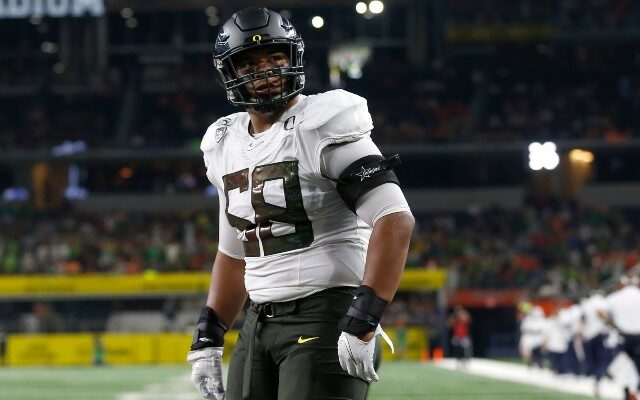 The Cincinnati Bengals passed on Penei Sewell at No.5 overall in favor of Joe Burrow’s former LSU teammate Ja’Marr Chase.  The Miami Dolphins did the same, reuniting Tua Tagovailoa with his former Alabama teammate in wide receiver Jaylen Waddle.

But then the Detroit Lions, picking at number seven overall, got their guy, and drafted Sewell.  Sewell becomes the highest drafted Oregon Ducks offensive lineman in program history.

EUGENE, Ore. — Penei Sewell became the highest-drafted offensive lineman in Oregon football history on Thursday when the left tackle was taken seventh overall by the Detroit Lions in the first round of the 2021 NFL Draft.

Sewell was dominant in two seasons protecting Herbert’s blind side before opting out of the 2020 season, and now will be charged with doing the same in Detroit for new quarterback Jared Goff. In 1,376 total snaps as a Duck, Sewell allowed just one sack.

A native of Malaeimi, American Samoa, Sewell finished 2019 as the top-graded offensive lineman in Pro Football Focus history at 95.5, becoming the first player in Oregon history and the first-ever sophomore offensive lineman to win the Outland Trophy as the nation’s top interior lineman. Sewell also led the nation with a PFF run-blocking grade of 95.3, and was third with a pass-blocking grade of 91.1.

Sewell joined LaMichael James (2010) and Marcus Mariota (2014) as the only unanimous first-team all-Americans in program history. He was named the 2019 Morris Trophy winner, AP Pac-12 co-offensive player of the year, and PFF Pac-12 player of the year after allowing no sacks and just seven quarterback pressures with a team-high 58 knockdowns in 926 snaps.

After coming to Oregon as the No. 1 prospect in the state of Utah, Sewell was the top freshman offensive lineman overall, the No. 2 offensive lineman in the Pac-12, and the No. 7 tackle in the nation with an 84.0 grade from PFF in 2018. He became the first offensive lineman in UO history to earn all-conference honors as a true freshman while also earning freshman all-America honors by USA Today and 247Sports.