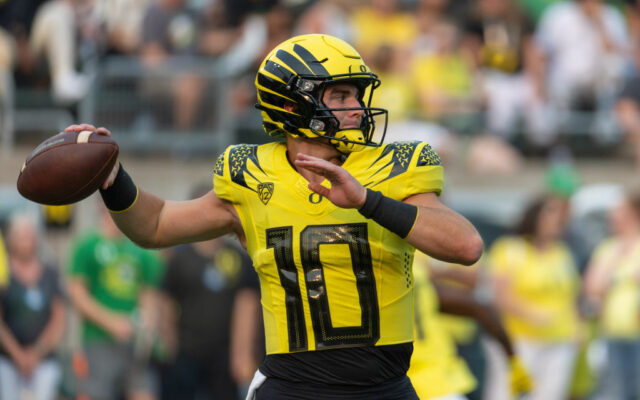 EUGENE, OR - SEPTEMBER 10: Bo Nix #10 of the Oregon Ducks passes the ball during the first half of the game against the Eastern Washington Eagles at Autzen Stadium on September 10, 2022 in Eugene, Oregon. (Photo by Tom Hauck/Getty Images)

The Oregon Ducks got rid of the bad taste of their 49-3 season-opening loss to Georgia with a dominant, complete victory last Saturday in their home opener.

The Ducks fell out of the AP Top-25 after the Georgia loss, and were ranked No. 11 in the Week One poll.  On Sunday following the win, the Ducks got back into the poll, ranked No. 25.

“We said we want to do simple, better,” head coach Dan Lanning said after the win, his first in Eugene.  “It was about fundamentals and technique.  I think you saw a lot of that show up in the game.”

A week after allowing seven touchdowns on seven consecutive possessions by Georgia, Oregon exorcised some demons on the Eagles, scoring touchdowns on each of their six possessions in the first half, and three more times to open the second half.  That totaled nine straight drives that finished in the end zone for Oregon in their home opener.

McCormick was wearing the jersey No. 18 in honor of his late friend and Ducks teammate, Spencer Webb, who tragically died in July.

Ty Thompson came in for Nix at quarterback midway through the third quarter with Oregon leading 56-7.  Thompson led a 9-play, 78-yard drive that finished with Cardwell scoring on the ground from 10 yards out to make it 63-7.  He followed that with another touchdown drive of 11 plays and 76 yards to make it 70-14 before giving way to Jay Butterfield for the final drive of the game.  Thompson finished 5-of-7 for 63 yards passing.

Defensively, Oregon grabbed a pair of interceptions, one each from cornerbacks Christian Gonzalez and Trikweze Bridges.  Defensive lineman D.J. Johnson and linebacker Keith Brown tallied the only two sacks of the day.

The win extends Oregon’s non-conference home winning streak to 20, the third-longest such streak in the country.

The game is scheduled to kick off at 12:30 p.m., nationally televised on FOX.