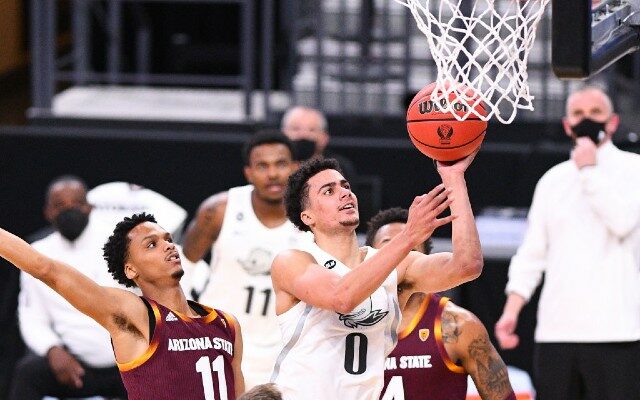 The top-seed Oregon Ducks beat the 8-seed Arizona State Sun Devils 91-73 Thursday afternoon in the quarterfinals of the Pac-12 Tournament in Las Vegas.

With the win, the Ducks advance to the semifinals where they will face the winner of 4-seed UCLA and 5-seed Oregon State (2:30pm, Pac-12 Network).   That semifinal will take place Friday night at 5:30pm and can be heard on 750-AM The GAME via Westwood One, as well as streaming live at 750TheGame.com, the Radio.com App and the iHeart Radio App.

Oregon was led in scoring by the 21 points of LJ Figueroa, a season-high.  Will Richardson had 17 points and Eugene Omoruyi had 15 points in the win.  AP Pac-12 Player of the Year Chris Duarte finished with 6 points on just three shot attempts (2-for-3, 1-for-1 3pt), with three rebounds, an assist and two steals.

Figueroa’s career-day in scoring was highlighted by his 9-of-16 shooting performance including making 3 of his 5 attempts from three-point range, as well as this spectacular finish of an alley-oop feed from Duarte in the second half.

After holding an eight-point halftime lead, Oregon came out strong in the scond half to push the advantage to 54-40 at the under-12 timeout.

1st Half notes: Oregon led the Sun Devils 35-27 at the half thanks in part to a 10-0 Ducks run midway through the first half that turned a 19-19 tied game to a 29-19 advantage with 4:55 remaining.  Oregon was led by Will Richardson’s 13 first half points on 5-of-7 shooting, including 2-for-3 from three-point range.  Eugene Omoruyi and LJ Figueroa each had 7 points in the opening half.   Oregon shot 51.7% as a team in the first half compared to 37% for Arizona State, while also making 4 of 8 from three-point range (50%).  After falling way behind early in rebounding, the Ducks cleaned up the glass for a 17-16 rebounding edge at the break.  Each team had 7 assists at the break.  Oregon’s largest lead was 11 at 35-24 after a Richardson triple with 2:25 remaining.  ASU’s largest first half lead was two points, the latest at 17-15 with 9:34 to go.