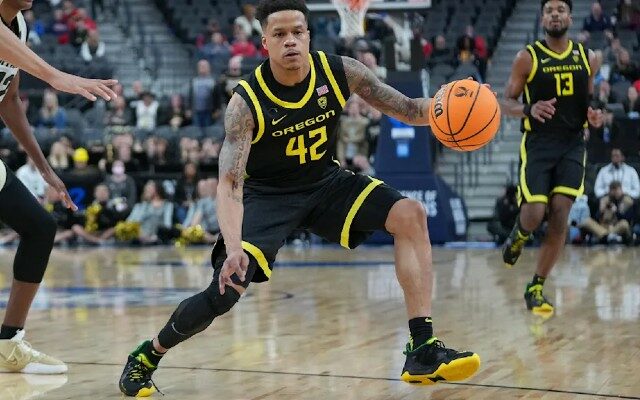 Jacob Young had 17 points, De'Vion Harmon had a team-high 19 points, and Oregon pulled away in the second half to beat Utah State on the road 83-72 in the first round of the NIT (AP Images)

Oregon, a five-seed in the NIT bracket, visited four-seed Utah State on Tuesday night, and were playing without Will Richardson and big man N’Faly Dante, neither of whom traveled with the team due to non-Covid related illness.

Oregon used a big second half to take control against the Aggies, outscoring the home side 30-13 in the first 12 minutes of the second half.  The Ducks finished strong, leading by as many as 17, to win 83-72 on the road to advance to the second round of the NIT.

The Ducks will face Texas A&M in the second round this weekend.

De’Vion Harmon led the Ducks with 19 points while Jacob Young netted 17 in the win.  Rivaldo Soares had a career-high 13 points to go with four rebounds.

Notably, it was Dana Altman’s 300th victory as head coach of the Oregon Ducks.  Per the program, Altman becomes the fourth coach in the modern era (since 1978-79) to win 300 or more games with a Pac-12 school.

The win also means it is 12 straight seasons that Altman’s Ducks have won at least 20 games in a year.

Up next, Oregon will visit Texas A&M in the second round of the NIT in College Station, Texas.  Game time is still to be determined on either Saturday or Sunday this weekend.