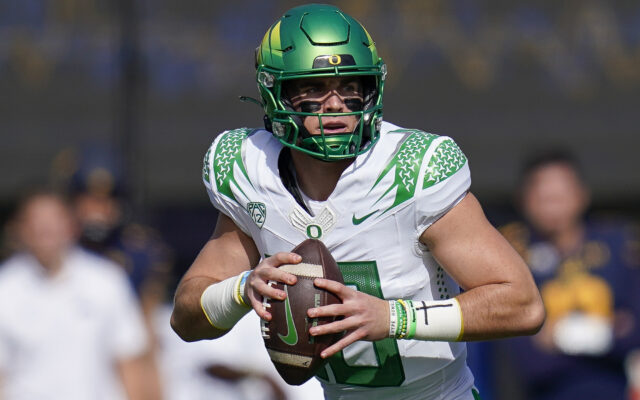 Oregon quarterback Bo Nix looks to pass against California during the first half of an NCAA college football game in Berkeley, Calif., Saturday, Oct. 29, 2022. (AP Photo/Godofredo A. Vásquez)

The Oregon Ducks are No. 6 in the second edition of the College Football Playoff rankings.

#Breaking The Oregon Ducks are No. 6 in the College Football Playoff rankings.

That is a two-spot rise for the Ducks, who debuted at No. 8 in the initial rankings a week ago.  The Ducks beat Colorado on the road 49-10, and benefited from then-No. 6 Alabama losing at then-No. 10 LSU and then-No. 4 Clemson getting blown out at previously unranked Notre Dame.

LSU is the highest-ranked two-loss team in the rankings, checking in at No. 7.  That is one spot ahead of the one-loss USC Trojans who rose a spot to No. 8.

Alabama slips to No. 9 and Clemson to No. 10.  Previous No. 1 Tennessee fell four spots to No. 5 after losing at Georgia, the new No. 1 team in the CFP Rankings after debuting at No. 3.

The unbeaten TCU Horned Frogs are No. 4 in this week’s edition of the rankings.  TCU visits No. 18 Texas on Saturday.  The Longhorns are a touchdown favorite in Austin.

No. 6 Oregon returns home this Saturday to host rival Washington, who crack the CFP rankings at No. 25 following their home victory over then-No. 23 Oregon State last Friday night.  Oregon is a 13-1/2 point favorite in Eugene (4 p.m., FOX).

The full Top-25 for the Nov. 8th edition of the College Football Playoff rankings:

We have movement in the top four 👀 pic.twitter.com/J7qB4Jk83k