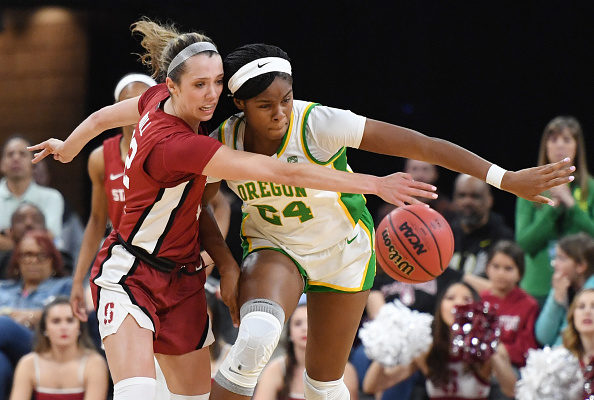 The Oregon Ducks had already wrapped up their third straight Pac-12 regular season championship earlier this week. Now, Sabrina Ionescu and the Ducks were looking to beat Stanford and claim the Pac-12 Tournament Championship for the second time in the last three seasons. Stanford (winners of the tournament in ten of the last thirteen seasons) would not go quietly into the sunset.

The Cardinal found success on the offensive glass in the opening quarter, and grabbed a 17-14 lead at the end of one. Stanford’s Kiana Williams led all scorers with 11 points.

Ionescu would flip the switch in the second quarter, surging for 15 points in the quarter and helping Oregon reclaim momentum as the first half was nearing a close. Minyon Moore was doing her part , shooting an efficient 4 of 5 from the field for 13 points (2-2 from three). Oregon dominated the second quarter, outscoring Stanford 29-9 and building a seventeen-point lead heading into halftime.

15 points for @sabrina_i20 in the second quarter as Oregon outscores Stanford by 20 to take a 17-point lead into the half 👑 #GoDucks pic.twitter.com/HCbx9E6q0C

The third quarter would be much of the same for Oregon. Moore continued her hot shooting performance from beyond the arc, setting a season high with 21 points through three quarters. Ionescu locked in another double-double, her 20th of the season and 58th overall in her career.

Oregon built a 66-39 lead heading into the final quarter.

There would be no comeback for Stanford in the final quarter of play. Oregon would continue to grow their lead to as much as 38 points late in the fourth quarter. Sabrina Ionescu would leave the game with 3:37 to play, as the Duck faithful rose to their feet in support. Ionescu would finish with 20 points, 8 rebounds, and 12 assists.