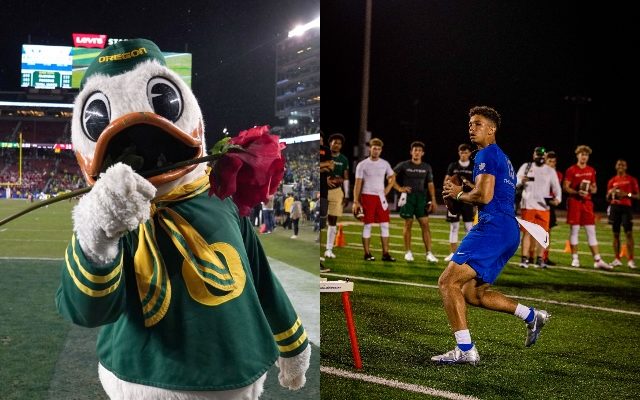 Oregon Ducks quarterback commit Ty Thompson competed in the Elite 11 quarterback showcase in Nashville last week. His performance was so impressive, he was named the top performer by both Rivals and 247Sports.

Duck commit Ty Thompson (@ty_thompson7) was the only QB at the Elite 11 named as the best in two different categories:

Plain ol’ liked everything I saw about Ty, especially his confidence. Modest, not cocky, like his future center, @bigjax36.

Thompson may be getting another star added to his profile after his dominant Elite 11 performance.

“I like Oregon commit Ty Thompson a ton, and he could end up as a five-star (prospect),” – @rivalsmike.

I spoke with @Ty_Thompson7, aka “The People’s Champ,” about his Elite 11 experience and joining arguably the nation’s No. 1 offensive recruiting class https://t.co/UvlXeyJ0Cu pic.twitter.com/vwYrsChbsf

Many scouts and analysts see the potential for the current 4-star prospect, and rumor is that Thompson will be receiving that 5th star before it’s all said and done.

With the event now concluded, I rank the Elite 11 participants and share thoughts on each competitor.

The 6′ 4″ 200 pound QB prospect is arguably the highest riser of any high school prospect in the country at the moment. Oregon currently holds the No. 1 2021 recruiting class in the Pac-12, and No. 6 class nationally.