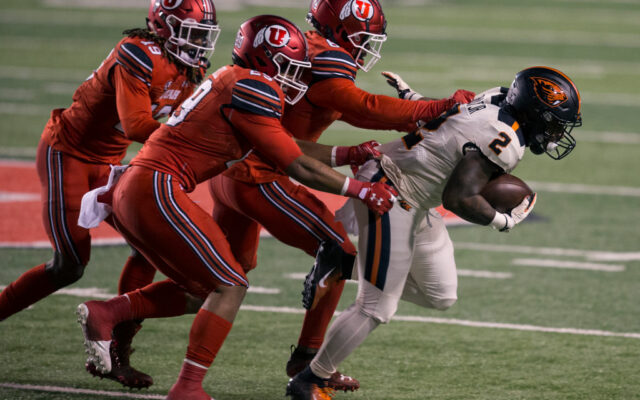 Oregon State found itself in a precarious position on Saturday, no Jermar Jefferson and a first-time starting quarterback against Utah’s staunch defense.

Chance Nolan performed admirably given the circumstances. However, when your leading rusher is a former QB turned linebacker on one play, that’s a problem.

Jack Colletto’s 40-yard run in the second quarter was the longest run of the game. It also, as I said, represented the most yards on the ground for the Beavs.

Also, the second leading rusher was Nolan. Not good.

The Beavs were able to close the game in the first half to 16-10, but then they were shut out in the third quarter.

On top of their own struggles, Utah took a 30-10 lead before OSU got going in the second half.

However, the Beavers would not go quietly into the night. Nolan led the team down the field with a 28-yard run and a 29-yard pass. Calvin Tyler, Jr. ran it in from six yards out to get the squad within 13, 30-17.

Then, Oregon State actually recovered their onside kick attempt, but they were forced to punt after three plays.

Utah returned the favor and went three-and-out too. Nolan moved the ball down field through the air on the next drive, until the Beavs stalled out leading to a fourth-and-10.

OSU got a defensive holding call against Utah to extend the possession. On the next play, Nolan hit Kolby Taylor for a 21-yard touchdown.

The Utes turned the ball over on downs on their next drive. Nolan got the Beavs down to Utah’s 31, but they couldn’t convert on fourth-and-1.

Despite the turnover on downs, Oregon State wasn’t out of it because they still had all three timeouts. Well, Utah went three-and-out, including an incomplete pass so the Beavs could save a timeout.

Nolan had a chance to be the hero two weeks in a row, but it just wasn’t meant to be this time. On fourth-and-8, Nolan couldn’t connect with Luke Musgrave, and Utah took over on downs.

Next up, the Beavs battle Stanford on Saturday in Corvallis on ESPNU.