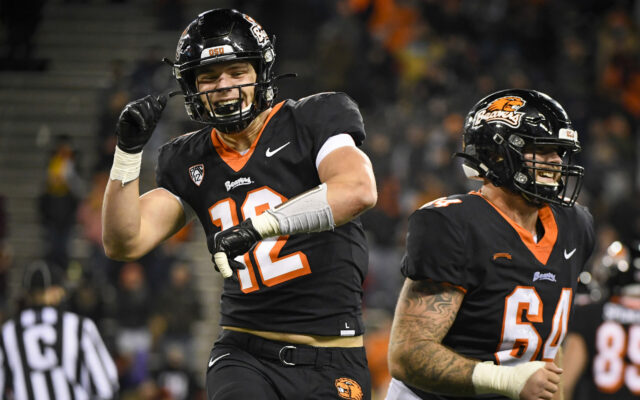 FILE - Oregon State linebacker Jack Colletto (12) and offensive lineman Nathan Eldridge (64) celebrate Colleto's touchdown in the fourth quarter of an NCAA college football game against Arizona State, Saturday, Nov. 20, 2021, in Corvallis, Ore. Turns out Colletto can do a lot of different things. He's a rare two-way player for the Beavers, playing both at inside linebacker and at running back. Even sometimes at receiver. (AP Photo/Andy Nelson, File)

The Beavers are no longer ranked following last week’s tough 24-21 road loss at Washington.  But there remains plenty at stake with three games remaining in the regular season, including this Saturday’s home game against Cal.

Standout linebacker/running back Jack Colletto called in to John Canzano’s Bald Faced Truth radio show on Tuesday to recap the loss in Seattle and how the team is moving on.

Colletto also talked about the home field advantage at Reser Stadium, and if he is taking time to enjoy his journey this season in Corvallis.

Listen to the full appearance here, and catch the BFT live weekdays 3-6 p.m. on 750 The Game.