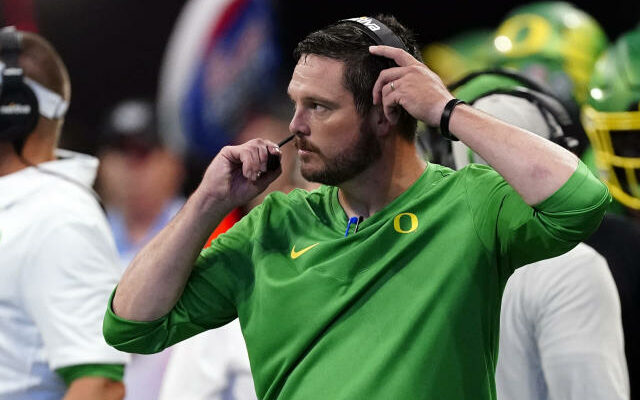 The reigning national champions of college football looked the part Saturday afternoon in Atlanta, GA.  Unfortunately for the Oregon Ducks and first-year head coach Dan Lanning, it came at their expense.

The final score says it all.  Lanning’s debut as a head coach did not go as planned, with his former boss, Kirby Smart, and former program, providing teach-tape all over the field.

Lanning has said more than once he embraces the role of being a life-long learner.  Saturday’s season-opener provided plenty of lessons.

Bo Nix, the transfer from Auburn, started at quarterback for Oregon, and never left the field despite some clamoring from fans for Ty Thompson to see some snaps once the game got out of hand.  Nix finished 21-for-37 for 173 yards and two interceptions.

Georgia signal-caller Stetson Bennett finished an impressive 25-for-31 for 368 yards and 2 touchdowns.

Oregon’s home-opener awaits next Saturday, Sept. 10th at Autzen Stadium.  FCS-foe Eastern Washington is the opponent.  Kickoff is set for 5:30 p.m.  The game will be televised on Pac-12 Network.