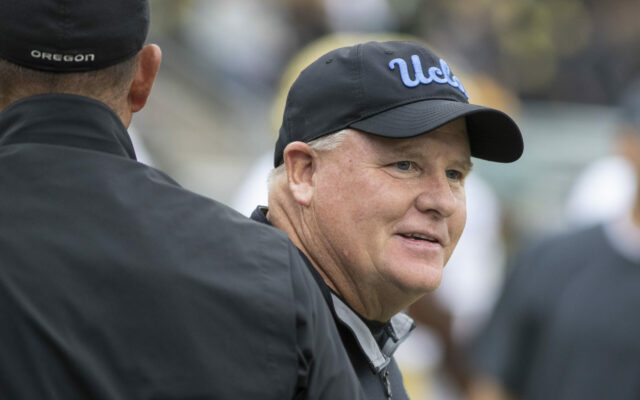 The Oregon Ducks and UCLA Bruins are both idle this week, but there already is much anticipation for their showdown on Oct. 22nd in Eugene.

Oregon is 5-1 overall and 3-0 in conference play after their 49-22 victory at Arizona over the weekend.  The Ducks remain at No. 12 in the latest AP Top-25 poll released Sunday.

There is no line out yet for the Ducks and Bruins.

This will be Chip Kelly’s third trip back to Eugene since taking over as UCLA head coach in 2018.  Kelly is 0-2 against the Ducks at Autzen Stadium, losing in 2018 42-21 and again in the Covid-shortened 2020 season, 38-35 where he started Chase Griffin at quarterback in place of the unavailable Dorian Thompson-Robinson.  The Ducks and Bruins met again last season at the Rose Bowl, a 34-31 Oregon win in a competitive game.

Kelly was offensive coordinator at Oregon in 2007-08 before taking over as head coach in 2009 and leading the Oregon program for four memorable seasons that included four Pac-12 Conference titles, two Rose Bowl appearances and one victory, a Fiesta Bowl victory, and an appearance in the BCS National Championship Game, a 22-19 loss to Cam Newton and Auburn on Jan. 10th, 2011.