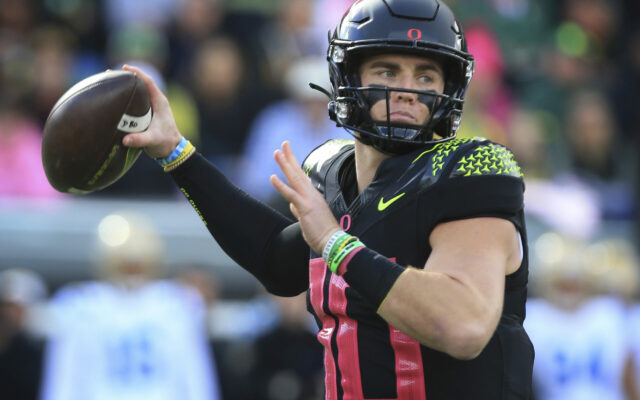 Oregon's Bo Nix throws down field against UCLA during the first half in an NCAA college football game Saturday, Oct. 22, 2022, in Eugene, Ore. (AP Photo/Chris Pietsch)

ESPN’s College GameDay broadcast live from University of Oregon campus early Saturday morning, and head coach Dan Lanning’s program (read: progrum) took the mantle and capitalized on the national attention with an eyebrow-raising performance that has the country buzzing.

Oregon has won six in a row.  They are 6-1 overall, their lone loss a glaring season-opening defeat to then-No. 3 Georgia in a “neutral-site” game played in Atlanta, Ga., a 49-3 thumping by the Bulldogs, the current top-ranked team in the country.

The Ducks are now 4-0 in conference play, the only unbeaten Pac-12 team remaining.   The next two weeks they are on the road at California and at Colorado before consecutive home games with rival Washington and reigning conference champion Utah; the Beavers host the Ducks after that in the regular season finale.

Nix averaged 10.1 yards per pass, completing 22 of his 28 attempts for 283 yards and the five scores.  He did not throw an interception, and also carried the ball eight times for 51 yards (6.4/rush).

Oregon scored on the first play of the second quarter, a 17-yard connection from Nix to tight end Terrance Ferguson, to take a 10-3 lead.  The Ducks would go on to score 28 points in the quarter, keyed by an onside kick that Oregon recovered and scored another touchdown to turn a 10-10 game into a 28-10 advantage before UCLA’s offense could touch the ball.  Oregon scored again right before halftime to go up 35-13 at the break.

The lead got to 45-23 before a late UCLA touchdown accounted for the 45-30 final score.

Tune in Monday for John Canzano’s reaction to the Ducks win on The Bald Faced Truth from 3-6 p.m.