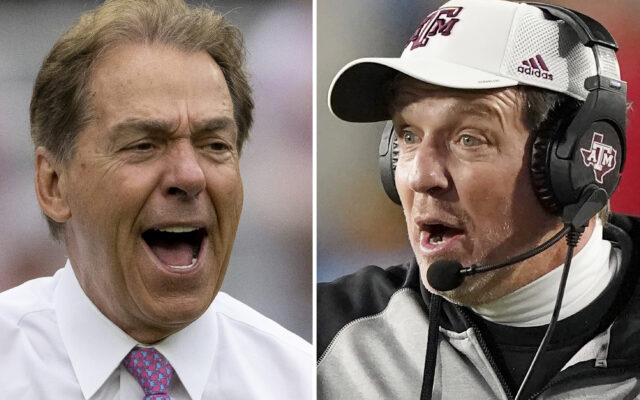 FILE - At left, Alabama head coach Nick Saban yells to the sideline during the first half of Alabama's NCAA college football scrimmage, Saturday, April 16, 2022, in Tuscaloosa, Ala. At right, Texas A&M coach Jimbo Fisher reacts to an official's call during the second half of the team's NCAA college football game against Mississippi, Saturday, Nov. 13, 2021, in Oxford, Miss. Texas A&M coach Jimbo Fisher called Nick Saban a “narcissist” Thursday, May 19, 2022. after the Alabama coach made “despicable” comments about the Aggies using name, image and likeness deals to land their top-ranked recruiting classes. Saban called out Texas A&M on Wednesday night for “buying” players. (AP Photo/File)

Nick Saban offended Jimbo Fisher when he said Texas A&M bought every single one of its players last year on an NIL deal.

Fisher returned serve with a fiery press conference calling out Saban’s hypocritical stance, among other things.

Social media reaction poured in to the feud between SEC heavyweight coaches and former friends.

“I kept saying “this can’t really be happening, Is this real life?’–Lane Kiffin. It’s been a surreal 24 hours as the coaching world watched on in amazement as Nick Saban and Jimbo Fisher slung mud at each other, throwing out some nasty allegations: https://t.co/1mwinllkUx

This will eventually die down, but…..

The thing I’ll never forget is that Jimbo Fisher, while sitting in front of the official Texas A&M logo, said on the record in a hastily-called press conference for the world to hear that someone should slap Nick Saban.

Jimbo Fisher taking a blow torch to Nick Saban. I’ve never seen anything like this in college football. Not in public, anyway. This is deeply personal: pic.twitter.com/JDbPQQhAB3