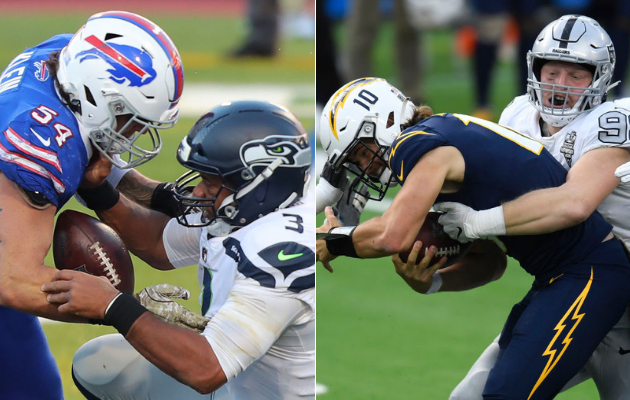 Every week in the NFL is different from the last. There will always be a surprising team or game or performance, but then sometimes you see the dam break on something that should have happened weeks ago.

Once known as the Legion of Boom, the Seahawks secondary looks more like the Legion of Oh No. Seattle is giving up a league-worst 362.1 passing yards per game, which is nearly 52 yards worse than the 31st-worst team (Atlanta).

Josh Allen tied his career-high passing yards with 415, and he scored four total TDs (three pass, one rush) in a 44-34 win against Seattle.

The 44 points is the most given up by Seattle since Pete Carroll became the head coach.

Before you Seahawks fans jump on my case, I must say the defense is dealing with a lot of key injuries. Corner Shaquill Griffin did not play while his CB teammate, Quinton Dunbar, played through an injury and you could tell he was struggling.

Seattle finally got Jamal Adams back, but the Bills still did whatever they wanted against Seattle.

The good news for Seattle, they still lead the NFC West after Arizona lost to Miami. The bad news, if the defense doesn’t figure itself out, they won’t last in the playoffs.

A week after the Chargers gave Denver a win in Week 8, the Raiders broke up Justin Herbert’s game-winning TD to his tight end with no time left.

The Los Angeles Chargers and Atlanta Falcons have been (justifiably) mocked for giving up lead after lead in past seasons. However, this game wasn’t a blown lead.

LA and Las Vegas went back and forth before the Raiders took a 28-17 lead. Herbert didn’t let that deter him.

The former Oregon Duck led the Chargers on two scoring drives, but a failed two-point conversion kept the Chargers down, 28-26.

After a Vegas field goal, the Chargers had 4:37 and three timeouts to work their way down the field and try to win on a touchdown.

Herbert led a masterful 13-play drive to get into scoring position. Unfortunately, on back-to-back plays, the Charger receivers couldn’t hold on to the passes thrown their way.

The Chargers QB isn’t deterred. In his postgame press conference, he referenced his first year at Oregon.

“Freshman year at Oregon we went 4-8, and so that was obviously tough,” he said. “Never fun to lose like that, but we stuck together. We never gave up on each other, and we turned things around there.”

Safe to say Herbert is the leader and quarterback the Chargers hoped he would be (and we all knew he could be) when they drafted him in April.

The uncertainty in LA is if Anthony Lynn will be around next year to coach the young QB. If nothing else, the Chargers defense needs to improve for the team to be a winner in the AFC.

Oh and we got this sweet moment between former Duck QBs.

Marcus Mariota was one of the first to console Justin Herbert after a heartbreaking last-second loss. pic.twitter.com/GUOWbXmhOO

Who had Garrett Gilbert leading the Dallas Cowboys to a 13-0 lead in the first half against the unbeaten Steelers? Put your hand down, you liar.

Dallas had plenty of chances to really extend their lead against Pittsburgh, but the Steelers found a way to comeback and avoid a crazy upset.

Who had the New Orleans Saints completely dismantling the Tampa Bay Bucs? The Sunday Night Football crew did NOT.

Tampa Bay was just awful. The Bucs only ran the ball FOUR TIMES — the fewest rushing attempts in franchise history. Tom Brady was average (at best), while the Saints played inspired and mad.

Who had Miami’s Tua Tagovailoa going toe-to-toe with Arizona’s Kyler Murray in the desert? Woo, that was a fun game. I didn’t get to watch it live, but every highlight of the game made it feel like I watched the whole game.

The two former first-round picks dazzled throughout the game with Miami coming out on top thanks to Cardinals kicker Zane Gonzalez coming up short on a game-tying 49-yard field goal attempt. You read that right, it was short, not wide.

Cam Newton hasn’t been able to make Tom Brady’s weapons from last year look any better than Brady made them look last year. The Pats also had the most players (8) in the NFL to opt out before the season due to COVID-19 concerns. Not an excuse, just a fact.

The Jets are awful. Adam Gase should have been fired after they lost to my Broncos in Week 4. Sam Darnold won’t play, Joe Flacco will start at QB for New York.