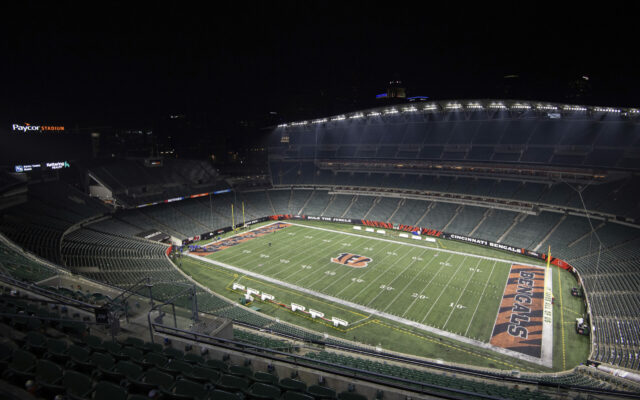 Paycor Stadium sits empty after the NFL postponed the game following an injury to Buffalo Bills' Damar Hamlin during the first half of an NFL football game between the Cincinnati Bengals and Buffalo Bills, Monday, Jan. 2, 2023, in Cincinnati. (AP Photo/Emilee Chinn)

The NFL issued a statement Tuesday morning announcing the Week 17 game between the Bills and Bengals will not resume at any point this week.

The contest was suspended and then postponed following Bills safety Damar Hamlin collapsing after a first quarter tackle on Cincinnati’s Tee Higgins.  Hamlin suffered cardiac arrest, per a statement from the Bills on Tuesday morning.  Hamlin was administered CPR on the field and transported to University of Cincinnati Medical Center where he remains in critical condition as of Tuesday morning.

The NFL said no changes have yet been made to the NFL Week 18 schedule, and no decision has yet been made on whether or not the Bills-Bengals contest will be resumed at a later date.  But it will not be made up this week.