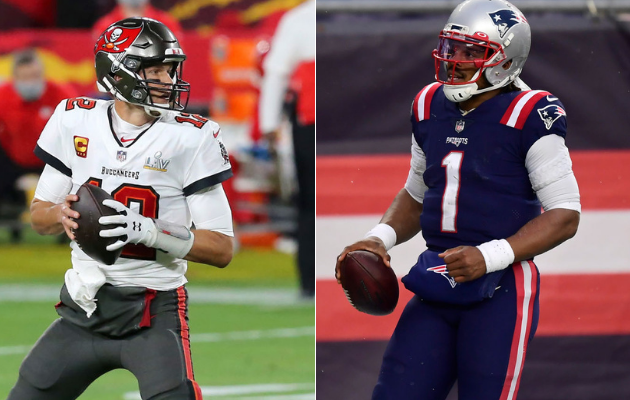 The NFL will see more player turnover than potentially any season ever this offseason. The salary cap is dropping instead of increasing after COVID-19 hurt the league’s revenue stream.

Even with all that, two teams will have the same quarterbacks they had last season.

The Tampa Bay Buccaneers signed Tom Brady to a four-year extension, which can be voided after one year. Brady already had one year left on his initial deal with Tampa, so essentially, the move is specifically to save money for this season.

The Tom-Brady extension saves the Buccaneers $19 million against the cap this year, per sources. The additional voidable years are there to defray the cost. It was another effort from Brady to keep as much of the team together as possible. https://t.co/65qAGO5Px7

In case all that is confusing, let’s try this. Because the salary cap is going down, some teams are adding years to a player’s deal to extend the cost instead of big salary cap hits during a specific year.

Now, most of that doesn’t matter for the next quarterback, Cam Newton, but it’s worth noting for your favorite team’s potential high-priced free agents.

Newton reportedly signed a one-year deal to rejoin the New England Patriots. The deal is worth up to $14 million with $6 million tied to incentives.

Comp update: Patriots are finalizing a 1-year deal worth close to $14 million for Cam Newton to return to New England, per source.

Last year, the former Panthers QB had his worst statistical season through the air.

He only threw for 2,657 yards and eight touchdowns while also throwing 10 interceptions. In seasons where Newton played at least 15 games, he never threw for less than 3,100 yards or had a season with more picks than TDs.

One piece of context to remember, the former No. 1 pick tested positive for COVID-19 in October. So, it’s unknown what kind of effects that had on Newton’s production.

Newton basically confirmed the news on Instagram where he posted a video with the caption including “Run it back” and “Chapter 2”.