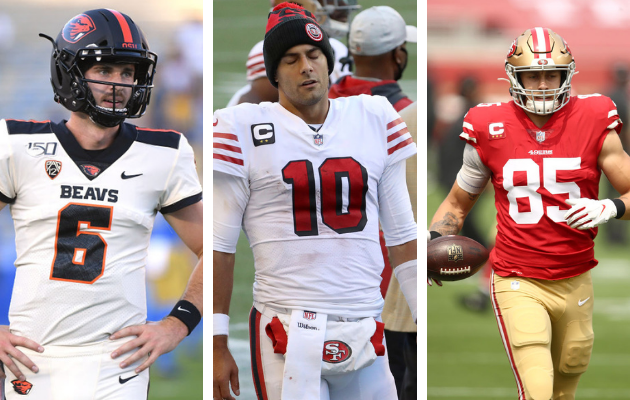 As we usually see in the NFL, a ton of news broke throughout the morning on Monday.

So, I’m not going to waste time with an introduction, let’s just dive in.

Jake Luton to Start for Jags

Fellow Pac-12 alum Gardner Minshew (Washington State) suffered a thumb injury on Oct. 11, but the Jags “didn’t know about the injury until this week,” according to ESPN’s Adam Schefter.

Luton was a sixth-round pick in last April’s NFL Draft.

Jimmy Garoppolo and George Kittle both left San Francisco’s loss to Seattle on Sunday, and the news is not good.

The 49ers struggling QB injured his right ankle the same way he did earlier in the year. Garoppolo suffered a second high right ankle sprain, and he’s expected to miss about six weeks.

As for Kittle, he’s expected to be out eight weeks. The 49ers have nine weeks left — eight games and a bye — so Kittle’s season is likely over unless San Fran somehow reaches the postseason.

Seattle Seahawks defensive end Demontre Moore just played in his third game of the year. He won’t be allowed to play again until after Dec. 14.

STATEMENT BY AN NFL SPOKESPERSON:
Damontre Moore has been suspended six games without pay for violating the NFL policy on performance-enhancing substances. Moore will be eligible to return to the active roster on Mon., Dec. 14, following the team’s Week 14 game vs. the N.Y. Jets.

The good news to losing Moore is the Seahawks may not have used him a lot in the near future because they traded for Carlos Dunlap, who will be eligible to play for Seattle in Week 9.

The bad news is really just Seattle needs as many healthy bodies as possible for their not-so-good defense.

Chicago WR Javon Wims got in a fight with Saints CB CJ Gardner-Johnson after the latter snatched Wims mouth guard. The NFL suspended Wims without pay two games for the incident.

This thread of tweets helps breakdown what led to the fight.

THREAD: My Zapruder breakdown of the Chauncey Gardner-Johnson/Javon Wims beef.

It begins on this play on the Bears’ first possession of the second half. After exchanging some words, CJGJ rips Wims’ mouthpiece off and it falls onto the ground. pic.twitter.com/wwQgcbKdJ5

Las Vegas Raiders OL Trent Brown is in the hospital after a medical “mishap” before Sunday’s game with Cleveland.

#Raiders OT Trent Brown was hospitalized today after a mishap with his pre-game IV that caused air to enter his bloodstream and required immediate medical attention, per me and @TomPelissero. Brown will stay overnight for further tests.

So, to recap, we’ve had Tyrod Taylor suffer a punctured lung after a team doctor messed up, and now Trent Brown accidentally had air enter his bloodstream when he got a pre-game IV??

It might be time for the NFL to do some investigating into these incidents.