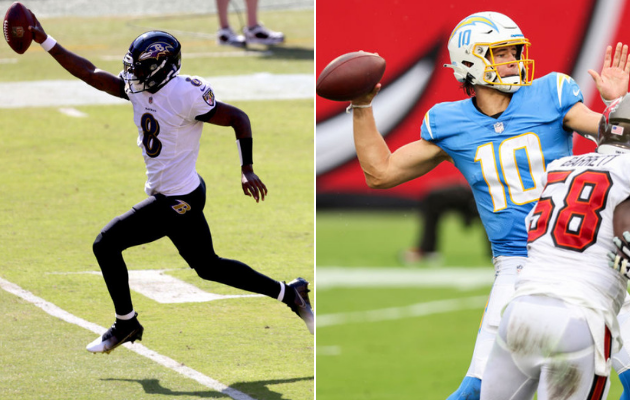 If you’re a fantasy football owner or a fan of sports betting there’s a number of things going on in the NFL that you may have missed so I’m here to give you everything we know right now.

No positives this morning for both the Titans and Patriots means that their games now are on track to be played.

At the time of publication on Friday, there is no new information.

The New York Jets had a positive test for COVID-19 come back on Friday, so the team sent everyone (players, coaches, etc.) home, according to ESPN’s Adam Schefter.

Now, the player has been retested, and the results should come back later in the day.

The Arizona Cardinals, the Jets opponent on Sunday, are scheduled to leave for New York also on Friday.

Even if the Jets do play, they’ll be without starting QB Sam Darnold. Earlier this week, Joe Flacco was named the starter, but on Friday Darnold was officially ruled out for the game on Sunday.

On Wednesday, he missed practice with a knee injury, and then Thursday Jackson was dealing with a stomach ache.

Schefter reported on Thursday that neither issue should keep Jackson out against Cincinnati on Sunday.

Honestly, if the Ravens were at all concerned, this week would be the one to sit Jackson as a precaution. And they’d still probably win. Sorry not sorry, Bengal fans.

Just kidding, the big conversation piece from Thursday Night Football was Tom Brady seemingly forgetting what down it was in the biggest moment of the game when he threw a bad pass incomplete on 4th down resulting in a Tampa loss.

If you missed it, here it is:

RIP to your survivor pool if you picked Tampa this week. Oh and Brady is even being compared to JR Smith when he forgot the score in the NBA Finals and other memorable sports gaffes.

The Washington Football Team is a disaster, which is not new. It is surprising given the steady hand (seemingly) controlling everything right now in Ron Rivera.

However, Dwayne Haskins Jr. is apparently not performing at the the level Rivera wants or needs to see for Haskins to continue being the team’s starting quarterback.

Haskins hasn’t had any consistency in the NFL, whether it’s his own play or the coaching staff around him. So, honestly, I can’t blame him for struggling last year or this year.

Many times in the past 15 years, we’ve seen NFL teams throw their young quarterbacks into the fire. Yet, it feels like Rivera doesn’t want to deal with Haskins and his development.

Rivera changed his tone (sort of) on Friday saying “by no means have I given up on [Haskins],” but benching him now kind of feels like you’re giving up on him.

The strangest part? Haskins is now QB3, behind Kyle Allen and Alex Smith.

Some NFL experts said the drop from QB1 to QB3 could be about preparation and if Haskins isn’t taking his role seriously.

How Kyle Allen is an “upgrade” at this point, I have a hard time believing that.

Here’s some irony: the Panthers fired Rivera on Dec. 3, 2019, after his Carolina Panthers lost (with Allen at QB) against Dwayne Haskins and Washington on Dec. 1 last year.

The Panthers won five of their first six games with Allen as the starting QB. Then, they lost four straight, and Rivera was fired.

I understand Allen knows Rivera’s system, but if you’re not giving up on Haskins then he should still be the starter and get his education in a “trial by fire” like many other quarterbacks have in the last 15 years.

You should already know this information, but the folks over at Good Morning Football on the NFL Network also gave their thoughts about Herbert becoming the Chargers starting QB on Friday morning.

Justin Herbert has officially been named starter of the @Chargers ⚡️@gmfb reacts to the news 👇 pic.twitter.com/FKIqvJhNr6

After missing the last two games for the San Francisco 49ers, Jimmy G is back this Sunday against Miami.