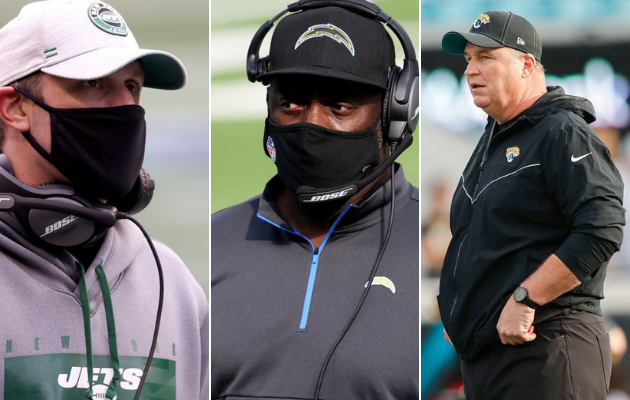 Before Week 17 wrapped up, Atlanta, Detroit and Houston had already fired their coaches. Then, Sunday the New York Jets finally fired Adam Gase after rumors swirled all year about when he’d be fired.

Now, on Monday, Jacksonville and the LA Chargers join the search for their next leading man.

There are a few places where teams could still move on. Philadelphia coach Doug Pederson and owner Jeffrey Lurie are scheduled to meet on Tuesday, so we could see another coach looking for work soon.

On the flip side, Cincinnati decided to keep Zac Taylor (not real surprising) after the Bengals played well with Joe Burrow, and even won a few games after Burrow tore his ACL in Week 11.

Three of the five openings have solid young quarterbacks or high draft picks for a QB, while the other two have established veterans. Let’s take a look.

The LA Chargers have Justin Herbert. You know, the guy that just set almost every rookie QB record? The guy that should be the NFL Offensive Rookie of the Year? Yeah, that guy.

Most total touchdowns as a rookie? Justin Herbert, 36 (31 passing, 5 rushing; previously held by Cam Newton, 32). The five rushing TDs are the most by any Chargers QB in franchise history.

Most passing touchdowns as a rookie? Justin Herbert, 31 (previously held by Baker Mayfield, 27).

Most completions for a rookie? Justin Herbert, 396 (previously held by Carson Wentz, 379).

Herbert is a star in the making, and the right offensive coordinator/offensive-minded head coach can make that happen.

To go with Herbert, the Chargers have Keenan Allen and Mike Williams as the big wide receivers. Add in Austin Ekeler, Joshua Kelley and Kalen Ballage at running back and LA is set with young talent.

Oh, and on the defensive side, they’ve got Joey Bosa.

The Chargers should target an offensive-minded head coach for Herbert. However, if they go with a defensive coach because that defense gave up a lot of leads, then they MUST get a good offensive coordinator.

I don’t think Kansas City would let Offensive Coordinator Eric Bieniemy go somewhere else in the division, so my top picks reflect that. However, if the Chiefs let him go anywhere, then Bieniemy is my top choice for all the openings, honestly.

I promise to not just do that though.

After what Buffalo Bills Offensive Coordinator Brian Daboll has done to fix/help fix Josh Allen’s accuracy issues, can you imagine Daboll calling plays for Herbert? He wouldn’t even need to help Herbert’s accuracy as much as Allen needed help.

What I’m trying to say is Daboll can develop a QB. The Chargers should try to get him.

This team needs to see some massive changes, not just on the coaching staff. The front office needs a huge kick in the pants.

Remember, he also traded the Texans 2021 first-round pick to Miami for Laremy Tunsil. So, the Texans No. 3 pick in the upcoming draft isn’t theirs… it’s Miami’s. Oof.

They’re not a perfect football team, based on roster construction, but they are clearly better than their 4-12 record in 2020.

Like the Chargers above, I don’t think a division opponent will let Houston take one of their coordinators, so I’m not including Arthur Smith. Also, until he’s hired, Eric Bieniemy is my top option.

If the Texans are smart they’ll pair Bieniemy, who is at least partially responsible for Patrick Mahomes ascension, with Watson. I think the results will be well worth it.

The No. 1 overall pick is going to Jacksonville, and if Trevor Lawrence leaves Clemson then he will be too.

Jacksonville won their first game of the season and competed hard before Doug Marrone stopped caring and played Mike Glennon even after Gardner Minshew was healthy enough to play. Or Marrone was told to tank after the first win.

Anyway, with the top pick the Jags can get Lawrence from Clemson, if he declares, or Justin Fields from Ohio State.

Honestly, Jacksonville can’t go wrong with either of my choices below, but Saleh might make more sense considering how iffy that defense was last year. The Jags were 31st in total Defense-adjusted Value Over Average (DVOA).

This team is a (bleeping) disaster. Except for Adam Gase, who never should have been hired to begin with, the Jets haven’t hired a veteran head coach since BILL PARCELLS in 1997 (!!) WHAT?!

In other words, every coach from Parcells to Gase has been a first-year NFL head coach.

I had to check that a few times to make sure I wasn’t missing something. So, after Parcells retired after the 1999 season, the Jets hired Al Groh. He lasted one season.

Then,  Herm Edwards, who was good until he fired for his first really bad season (4-12 in 2005). Next, the Jets gambled on Eric Mangini for three seasons.

Rex Ryan got six years including the first two resulting in two straight losses in the AFC Championship game. Followed by four bad years (not all his fault) with Todd Bowles, the Jets hired Gase.

Now, as much as I want Eric Bieniemy to get a head coaching gig, because he deserves it, I don’t think the Jets are the right fit.

The front office is a joke. The roster is poorly constructed. Everything is a mess. So, the Jets should want Bieniemy, but he shouldn’t want the Jets.

Matt Ryan isn’t getting any younger. However, one head coaching candidate already fixed one veteran quarterback, why can’t he help Matt Ryan?

Ever since Kyle Shanahan left Atlanta, Ryan hasn’t been the same. He was MVP the year Atlanta went to the Super Bowl.

However, if the Falcons want to stop giving up big leads, maybe they go defensive. Their last coach, Dan Quinn, was a defensive-minded coach, so if they go the offensive direction they’ll just try to outscore everybody.

Matthew Stafford is a good quarterback and deserved better than what the front office has put him through. He’s had three head coaches, he’s been to the playoffs three times and he’s been injured a lot.

Technically, the injuries are not all the front office’s fault alone. Stafford getting hurt is partly his body’s fault too. However, the Lions haven’t exactly built the team around him with a good offensive line or skill guys, since Calvin Johnson retired.

Honestly, Jim Caldwell shouldn’t have been fired after 2017. He had ONE losing season for the Lions. Caldwell had TWO playoff appearances, which is the most for any Lions HC since 2000. Ugh.

Anyway, the Lions have more issues than just head coach, but they can start to get it right with a good hire at HC.

Stafford is the QB right now, he’s 32 and under contract for two more seasons, the next head coach could decide to move on. The Lions have the No. 7 pick, so his replacement likely won’t come for a few years, unless he’s traded.

Anyway, the Lions should go for a veteran coach, but they’ll probably pick a rookie head coach. If they go for a vet, Bucs defensive coordinator Todd Bowles would be my pick.

Bowles has made the Bucs formidable on D, and he’s got head coaching experience. If he wants another HC gig, Bowles deserves a shot. It’s hard to blame him for what he did as the Jets leader.

If the Lions go rookie head coach, Bieniemy is the choice then he should try to steal Bowles from Tampa.

You’ll notice I didn’t name any college coaches. I don’t know how to predict the transition for college coaches, so forgive me if you’re an Urban Meyer or Ryan Day supporter.

I just don’t have a lot of faith in the college guys making the leap.