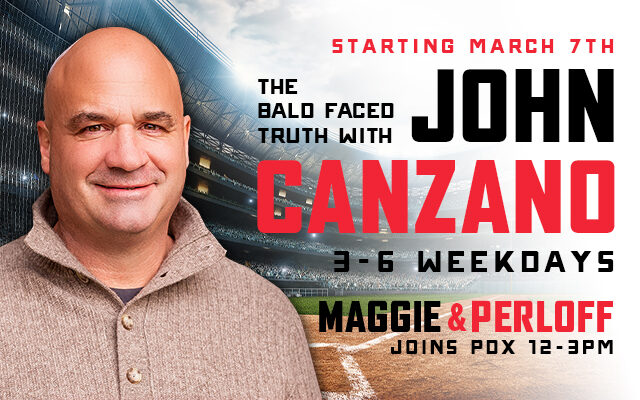 We have some exciting news!

Beginning March 7th (next Monday), The Bald Faced Truth with John Canzano will air at a “new” time slot, weekdays from 3-6 p.m. on 750-AM The Game.

The BFT first aired on The GAME in May 2008 (then on 95.5 FM) in afternoons before making the move to middays in 2012.  After a near decade-long run in that time slot, Canzano now takes his show back to the original window of 3-6 p.m. weekday afternoons.

In conjunction, The GAME debuts another ‘new’ show, as The Pulse with Peter Sampson makes the trek from Saturdays over to weekdays evenings 6-7 p.m, following the BFT.

Additionally, The GAME family welcomes CBS Sports Radio’s Maggie & Perloff to middays 12-3pm.  Maggie Gray and Andrew Perloff, AKA ‘McLovin’ from his days on The Dan Patrick Show, arrives to the Portland airwaves with the lineup changes effective Monday, March 7th.  Perloff is a familiar voice in Portland after spending ten-plus years as one of Dan Patrick’s Danettes.  The Dan Patrick Show continues to air weekday mornings on The GAME 6-9 a.m., followed by Jim Rome and The Jim Rome Show, weekdays 9 a.m.-Noon.

Set your calendars!  This will be the final week the BFT airs middays from Noon to 3 p.m.

The Pulse with Peter Sampson (6pm-7pm)

(A full station schedule, updated weekly, can be found here)

Spread the word and continue to follow The GAME online and on social media (@750TheGame), as well as John Canzano (@JohnCanzanoBFT).

In addition to airing on 750-AM, the GAME’s entire weekday lineup also streams on 750TheGame.com as well as the Audacy, iHeart, and TuneIn radio apps, plus your smart speaker (Just tell it to play “Seven Fifty The Game”).

As always, thank you for listening and for making The GAME the home of Portland’s best sports talk, as well as the play-by-play home of the Portland Timbers and Westwood One’s coverage of the NFL in Primetime (Sunday Night, Monday Night, and Thursday Night Football), the NFL Playoffs and Super Bowl, and March Madness!