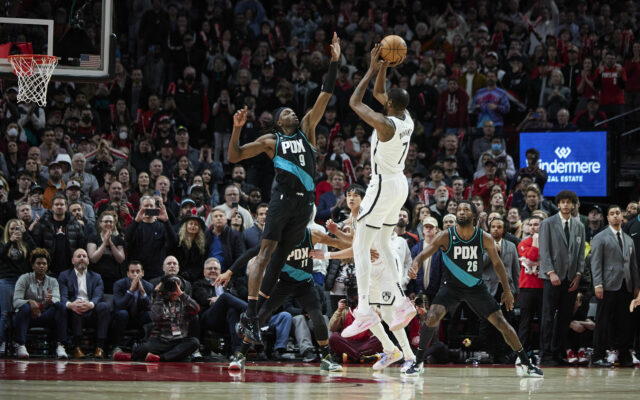 The Portland Trail Blazers finally lost a close game, falling to the Brooklyn Nets 109-107 after Royce O’Neale tipped in a Kevin Durant miss with 0.7 seconds left in the game.

Portland has found themselves in this kind of back-and-forth fourth quarter game multiple times this season and, almost like clockwork, turned it on at just the right time to sneak out the win.

But last night, Jerami Grant and Damian Lillard, two of Portland’s most clutch players, struggle to shoot a combined 10-37 from the floor. There was no switch to be flicked.

Durant led the way for Brooklyn with 35 points. O’Neale notched a triple-double in addition to his game winner. And Ben Simmons played what was probably his most complete game of the season – playing stifling defense in 32 minutes off the bench en route to 15 points, 13 rebounds, and seven assists.

The Trail Blazers were led by Lillard’s 25. Anfernee Simons rode a hot third quarter to 24 points. And Shaedon Sharpe scored a career-high 20 in 21 minutes off the bench.

Portland is off Friday before hosting the Utah Jazz Saturday night at 7pm.