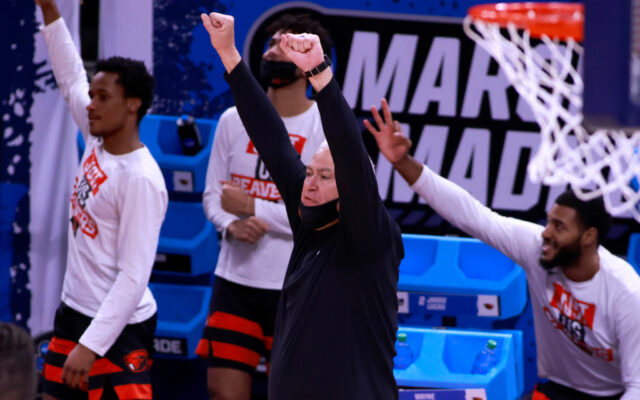 Missed a game score or result? It’s easy to do when there is so much action going on at once. Make sure to refresh this page for the latest scores and reaction. Results are in reverse chronological order (aka most recent updates at the top).

FINAL: Villanova (5) held on to beat Winthrop (12) 73-63 late in the game. Jeremiah Robinson-Earl led Nova with 22 points. Three other Wildcats scored at least 10 points. The win marks the eighth straight Round of 32 appearance for Villanova. The Wildcats will face North Texas (13).

FINAL: North Texas (13) upset Purdue (4) in overtime, 78-69. The Mean Green picked up their first NCAA Tournament win in program history in their victory over the Boilermakers. UNT is also the third double-digit seed to win on Friday, joining Oregon State (12) and Oral Roberts (15). Javion Hamlet finished with 24 points, 12 rebounds, five assists, which led the Mean Green in all three categories. North Texas will face the winner of Villanova (5).

Afte last year we deserve every bit of it!

FINAL: Oregon State (12) 70, Tennessee (5) 56. Oregon State got out to an 18-7 lead, behind swarming interior defense. Though Tennesee made pushes in the second half, the Beavers always had an answer and cruised to the victory. Big man Roman Silva led the way for Oregon State with 16 points. Jerrod Lucas went 4-9 from the 3-point line on the way to 14 points. The Beavers, who were picked to finish last in the Pac-12 before their stunning run through the Pac-12 tournament, advance to face Oklahoma State (4).

FINAL: Oral Roberts (15) 75, Ohio State (2) 72. Our first big upset of the tournament! Kevin Obanor paced Oral Roberts with 30 points and had his team leading most of the way before Ohio closed the final 4 minutes of regulation. Oral Roberts was able to force OT with some clutch free throws with under 15 seconds remaining and then cruised in the extra period. They advance to face Florida after their first tournament win since 1974.

The first round kicked off with a bang, with Florida (7) beating Virginia Tech (10) in overtime. Viriginia Tech led for the majority of the game, but Florida took control late in the second half. It looked like the Gators would cruise to victory until Nahiem Alleyne sent it to OT with this buzzer beater:

Florida kept their composure in OT and eeked out a 75-70 OT win.