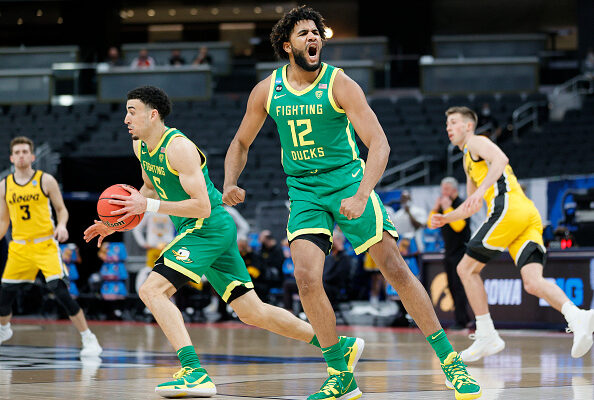 Catch ALL the action on your home for March Madness, 750 The Game! (Photo by Sarah Stier/Getty Images)

We’ll update you here on all Round of 32 games for the Men’s NCAA Tournament. You can catch all the games live exclusively on 750-AM, 750TheGame.com, and streaming on the Radio.com App and iHeart Radio App from Westwood One.

With the Round of 32 complete (see the recaps below), tip-off times have been set for the Sweet 16. Games will be on Saturday and Sunday.

Let’s try that again. Sunday’s tip times, announcers and venues are in.

The Trojans really opened up a can on the Jayhawks. Kansas never led. Not once. The Mobley brothers led the way for USC. Isaiah had 17 points (game-high) while Evan had a double-double with 10 points and 13 rebounds. The Trojans moves on to play (7) Oregon. USC won the only game the two teams played in 2021 — Feb. 22, 72-58. Now, they meet up in the Sweet 16.

Four Crimson Tide players scored in double figures, led by two starters with at least 20 points. Jaden Shackelford had the team-high 21, with John Petty Jr. right behind with 20 of his own. Alabama moves on to face (11) UCLA in the Sweet 16.

Anthony Polite led the Seminoles in their route of the Buffaloes with 22 points, five rebounds, four assists and four steals. Colorado is the first loss for the Pac-12. Florida State will face East top-seed Michigan after they survived LSU.

LSU gave the Wolverines a run for their money throughout the contest, but Michigan was able to rally and hold the Tigers off. Eli Brooks led the way for Big Blue with 21 points. Also, Hunter Dickinson had a double-double, 12 points and 11 rebounds. This is the fourth straight Sweet 16 run for the Wolverines. They will see (4) Florida State next.

The Blue Jays nearly let the game get away, but Ohio couldn’t convert on some late possessions costing them a legitimate shot at another upset. Marcus Zegarowski was the Creighton leading scorer with 20 points, as all five starters hit double figures scoring. Christian Bishop finished with a 12-point, 15-rebound double-double. The Blue Jays move on to face (1) Gonzaga in the Sweet 16.

The Pac-12 remained undefeated in the Men’s NCAA Tournament before Colorado’s loss. UCLA’s win made the conference a ridiculous 8-0 (not including Oregon’s no-contest) as the East No. 11 seed Bruins hammered No. 14 Abilene Christian. Johnny Juzang led the Bruins with 17 points. Cody Riley also collected a double-double with 12 points and 12 rebounds. UCLA battles (2) Alabama next.

The Gonzaga Bulldogs advanced to the Sweet 16 after knocking off the Oklahoma Sooners. While star Jalen Suggs was solid, dropping 16 points, the game ball definitely goes to forward Drew Timme. Timme had 30 points on 9-12 shooting, and also went 12-14 from the free throw line. The Sooners were paced by guard Austin Reaves, who finished with 27 points. Gonzaga advances to face (5) Creighton.

The Oregon Ducks continued a stellar run for the Pac-12 in the NCAA Tournament, beating #2 Iowa 95-80.

The game was a close shootout for much of the first half, before Oregon closed the last two minutes of the frame with a 10-0 run to take a 56-46 halftime lead. Oregon never relented in the second half, and cruised to the win behind their stellar guard trio of Chris Duarte (23 points), L.J. Figueroa (21), and Will Richardson (19). Up next, Oregon takes on (6) USC.

Ethan Thompson dealt with major foul trouble in the first half, which kept him low on the scoring early on. However, Thompson still finished with 26 points, including 17 of the Beavs final 20 points. He hit 15/16 from the free throw line. Oregon State led 44-30 at halftime, which was the largest halftime deficit for Oklahoma State this season. Up next, the Beavs face (8) Loyola-Chicago in the Sweet 16.

The Mean Green made it a game for the opening 10 minutes, but Villanova ended the first half on a 34-6 run. Nova led 47-27 at the break, and won going away. The Wildcats saw a balanced effort in the box score; three players finished with at least 15 points. Jeremiah Robinson-Earl led the team with 18 points (on 8/14 shooting), and he also had six rebounds, six steals, a steal, and a block. Jermaine Samuels had 15 points, nine rebounds, and four assists. Justin Moore also finished with 15 points, and he collected five assists and four rebounds. Nova moves on to face the No. 1 seed in the South, Baylor.

Oral Roberts finished the game on a 16-7 run. The Golden Eagles have now eliminated both (2) Ohio State and (7) Florida. This is just their second trip to the Sweet 16 in program history, 1974 was the first time when they reached the Elite Eight. Kevin Obanor paced Oral Roberts with a double-double, 28 points and 11 rebounds. Max Abmas, the nation’s leading scorer, finished with 26 points. Next up, the Golden Eagles face (3) Arkansas in the Sweet 16.

The game came down to the wire, and the Red Raiders had a drive to the basket for a layup that ended up being too fast and the ball smashed off the backboard too hard. Arkansas got the rebound and dribbled out the clock to advance to the Sweet 16. Justin Smith led the way with 20 points for the Razorbacks. Arkansas will take on (15) Oral Roberts after upsetting Florida.

There’s something about Jim Boeheim and getting a No. 11 seed. In 2018, the Orange also got an 11-seed and also went to the Sweet 16. Here we go again. The younger Boeheim, Buddy (Jim’s son), had a game-high 25 points to push Cuse into the next round. The Orange will face (2) Houston after they squeaked past (10) Rutgers.

The Bears jumped out to a 42-29 lead at halftime, and they never trailed in the second half. Matthew Mayer led the way with 17 points off the bench. Meanwhile two starters — Jared Butler and Davion Mitchell — each scored 16 for Baylor. Next up, the Bears battle the winner of (5) Villanova-(13) North Texas.

The Ramblers and Sister Jean are moving to the Sweet 16 after upsetting the top seed in the Midwest Region. Loyola-Chicago outplayed Illinois in almost every category. They shot 51 percent from the floor including 40 percent from three. The defense was swarming, and the Fighting Illini had no answers. Loyola-Chicago will play the winner of (12) Oregon State.