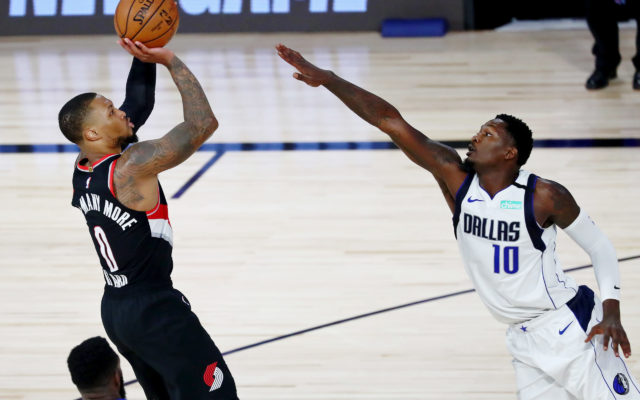 The Eastern Conference playoff bracket is now set, with the Orlando Magic claiming the 8th and final spot.

As for the Western Conference, the No. 8 seed will not be determined on Thursday, as there are still four teams vying for a spot in the play-in game. Those four teams (Blazers, Suns, Spurs, and Grizzlies) are all in action today, and two will be eliminated by tonight.

The Phoenix Suns who are currently tied with Memphis and San Antonio, remain undefeated in the bubble (7-0) and the hottest team to this point. Portland holds just a half-game lead over all three of those teams and controls their own destiny to “host” the play-in game, which would determine the 8th and final playoff spot in the West.

If the Blazers should lose to the Nets, they would need losses from Memphis, San Antonio, and Phoenix to maintain their position in the 8th spot.

This shot by Damian Lillard against Dallas, gave Portland control of their own destiny…

Tune in at 6 p.m. tonight on TNT to see the Blazers against the Brooklyn Nets in the biggest game of the year for Portland. Will Damian Lillard drop another 40, 50, or 60-point game? We’ll find out soon.