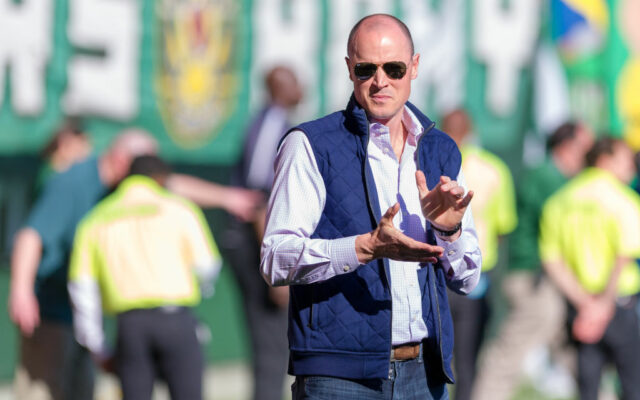 Merritt Paulson released a statement on Tuesday morning, removing himself as CEO of the Portland Timbers and Portland Thorns, and beginning a global search for a new CEO for the organization.

The statement is below.

The Portland Thorns were created to be a beacon of what is possible in women’s sports. A successful team is built on trust, equality and accountability, and today I am holding myself accountable for not doing enough.

I owe Sinead and Mana, the Thorns players and the NWSL my tireless effort to actively make sure what happened in 2015 never happens again.

It is devastating to me that my goal of creating the shining example of what a women’s sports team could be, has now become synonymous with abhorrent and predatory behavior.

Part of me holding myself accountable is recognizing that someone else needs to take the reins of the organization and operational decision-making.

As you know, I removed myself from Thorns decision-making, yet, in order for the organization to move forward and unite, I feel that another step is necessary. Effective immediately, I am removing myself as CEO of the Portland Thorns and Portland Timbers, and announcing a global search for a CEO of the organization.

Heather Davis will remain interim president and interim CEO. Sarah Keane, who Heather appointed interim COO, will lead the search for a permanent CEO. I know Heather and Sarah plan on having players meet final candidates so their voices can be heard. Through this process, I have committed to them that I will provide the organization with all necessary resources to ensure both clubs are not only a model of player safety, but the standard by which other organizations are measured.

Looking ahead, our organization is at a crossroads, and the future is not necessarily a clear path. No matter what happens, ensuring the long-term health and success of the Portland Thorns is critical to me, as I know it is for our players and the community.

Given the complexities involved on several levels, finalizing the correct path forward will take time. I love this organization as if it was part of my family, and to me, what is most important is getting it right.