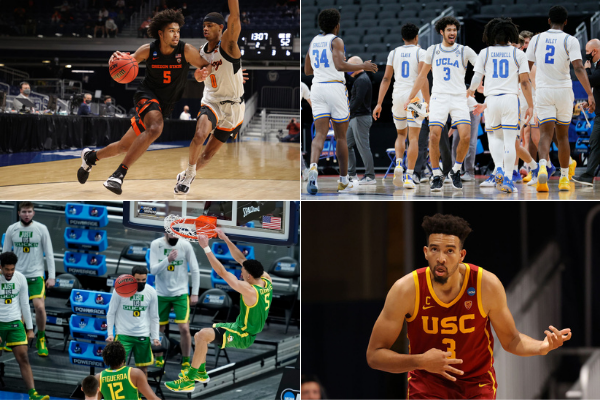 The Pac-12 men’s basketball teams have outperformed even the most homer brackets, except Bill Walton. Now, the conference could have three teams in the Elite Eight.

Like the Round of 64 and Round of 32 last week, we will see both the Sweet 16 and Elite Eight games next weekend. So, we will have a Final Four by Wednesday next week.

Here’s what we know about the upcoming games for each Pac-12 team.

The Beavs are slated to face No. 8 seed Loyola-Chicago, who is attempting to duplicate their 2018 Final Four run. Sister Jean and the Ramblers are back, and they absolutely thumped No. 1 seed Illinois.

Loyola-Chicago has a few players that have literally been here before because they were freshman when the team reached the Final Four three years ago. So yes, the “we’ve been there before” storyline is in the Ramblers favor, but the Beavs took it to their first two opponents despite not being in the NCAA Tournament since 2016. So, I say that storyline bears no weight.

The two guys who helped LCU back in 2018 as freshman were Cameron Krutwig and Lucas Williamson. Against Georgia Tech, Williamson led LCU in scoring with 21 points, and he had 14 in game two against Illinois.

On the other hand, Krutwig had 19 points, 12 rebounds and five assists against Illinois. He also had 10 points and five rebounds against Tech.

As for the Beavers, Ethan Thompson showed up big against Oklahoma State with 26 points. He also had 13 points, 10 rebounds and six assists against Tennessee.

Jarod Lucas scored 14 and 15 against OSU and UT, while also snagging six rebounds in each game.

Oregon State was also the underdog in both NCAA Tournament games — +8.5 against UT and +6 against Oklahoma State. They won both games by double digits — 14 over the Vols and 10 over OSU.

Now, I wouldn’t lump these two together, except they have to play each other. So, it’s easier to put them together to give a little insight. Obviously, they played each other this season, but just once.

The Trojans won the battle of the two, 72-58, back on Feb. 22 in Southern California. Tahj Eaddy led USC that day with 24 points. Evan Mobley had 11 points, but his brother Isaiah didn’t play.

Isaiah Mobley missed just the Oregon game before returning from a right calf strain, and he’s been great in the NCAA Tournament. He’s averaging 16 points and 6.5 rebounds per game. Meanwhile, Evan is averaging 13.5 points and 12 rebounds per NCAA game.

As for the Ducks, they didn’t play up to their standards in that February game against USC. Chandler Lawson was still starting in place of Eric Williams Jr., who came off the bench.

However, Williams has started instead of Lawson in every game since. After Williams took over, the Ducks won seven straight before losing to Oregon State in the Pac-12 Tournament. Now, Williams isn’t scoring in bunches, but his presence has clearly made some sort of impact.

In the Ducks only NCAA Tournament game, Chris Duarte (23) and LJ Figueroa (21) each scored over 20 points. Will Richardson got close and scored 19 points. Finally, Eugene Omoruyi had 17.

Against USC in February, Figueroa and Williams each scored 14 while Duarte only got 11. It could be that USC is just a bad matchup for Oregon. It could also be that Oregon wasn’t in their groove.

All in all, this game between two hot Pac-12 teams should be one of the best of the Tournament so far.

The Bruins have had the longest road strictly because they’ve played more games than the other four remaining Pac-12 teams.

UCLA needed to get past the First Four, the Round of 64 and the Round of 32. They did so, doing a little better in each game no less.

In the First Four, the Bruins needed a comeback to beat Michigan State, which they did by six. Then, the beat BYU by 11 in the Round of 64. Finally, the bracket broke the Bruins way as they got Abilene Christian in the Round of 32; they beat the Wildcats by 20.

Of the Pac-12 teams, UCLA is probably the hottest. Three games, three margins of victory that increase each game. Meanwhile, they run into one of the more surprising teams this season, but Alabama’s emergence to the Sweet 16 isn’t surprising.

The Tide last reached the NCAA Tournament in 2018, but before this season they hadn’t been to the Sweet 16 since 2004 when they also reached the Elite Eight.

This Alabama team is no laughing stock, and they’re not here by accident. They’re scoring nearly 80 points per game (79.7) and only giving up 69.5 per game.

The Bruins will have their work cut out for them. UCLA is averaging 73.1 points for and 67.9 points given up per game.