Photo from Pac-12.com
LOS ANGELES — OREGON has been chosen as the favorite to win the 2021 Pac-12 Conference Championship in a vote of 40 media members who cover the league.  The two-time defending Pac-12 FCG champion Ducks received 27 votes to earn the preseason nod, ahead of both USC (10) and UTAH (3).

The Ducks were chosen as heavy favorites to win the Pac-12 North Division this season, receiving 38 of 40 first-place votes. WASHINGTON, who won the North in 2020, received the other two votes and finished 2nd overall in the division projections. The Huskies also captured the North title in 2016 and 2018.

The media has correctly selected the Conference Champion in 32 of 60 previous preseason polls, including five times in the 10-year FCG era.

Following are the results of the preseason media poll (points 6-5-4-3-2-1, first-place votes in parentheses): 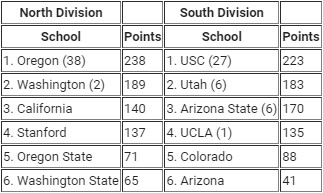 The 2021 Pac-12 Football Championship Game, presented by 76® and featuring the winners of the North and South Divisions, will take place on Friday, Dec. 3 at Allegiant Stadium in Las Vegas, NV. The game will be telecast to a national audience on ABC.

The 2021 Pac-12 football season kicks off on Saturday, Aug. 28 with a Week 0 matchup between Hawaii and UCLA. The first Conference showdown features Stanford and USC in Los Angeles on Saturday, Sept. 11 at 7:30 p.m. on FOX. Click here for the complete Pac-12 Football schedule.