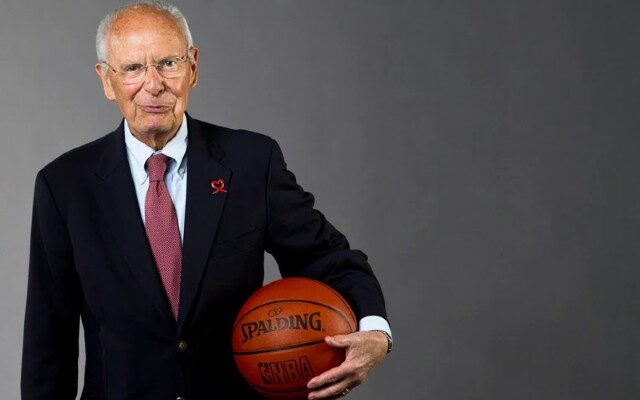 The original broadcaster of the Portland Trail Blazers, Bill Schonely, announced his retirement after 50 years with the organization (Trail Blazers)

PORTLAND, Ore. (March 12, 2022) – Trail Blazers founding broadcaster Bill Schonely has announced his retirement after over 50 years with the Trail Blazers organization as play-by-play broadcaster and team ambassador at the age of 92. Schonely, who coined many popular catchphrases for the organization including Portland favorite “Rip City”, was hired in 1970 by team founder Harry Glickman and served as play-by-play broadcaster for almost three decades. Schonely has served as a Trail Blazers ambassador since 2003 and has made appearances in the community in support of the team’s outreach mission.

“Bill has been a fixture of the Trail Blazers organization since its inception and will continue to be forever engrained in this city,” said Dewayne Hankins, President of Business Operations for the Trail Blazers. “We thank Bill immensely for his 50+ years of hard work and everything he has given to our organization, the city of Portland and the entire NBA community.”

Schonely was one of the organization’s earliest employees at hire number six. He was tasked with quickly assembling a radio network to introduce Oregon to the Trail Blazers organization. Serving as the team’s play-by-play voice for nearly 30 years, he called over 2,500 games including the team’s incredible championship run in 1977 and the exciting runs in the 1990s. Schonely maintained a streak of calling games throughout his 30-year run that was only interrupted in 1982-83 when he stepped away to recover from heart bypass surgery. Prior to joining the Trail Blazers organization, Schonely served in the United States Marine Corps and worked at radio stations throughout the country.

In 1999, Schonely was inducted into the Oregon Sports Hall of Fame for broadcasting and in 2012, he was awarded the Curt Gowdy Media Award from the Naismith Memorial Basketball Hall of Fame for his contributions to the game as an outstanding broadcaster.

Schonely will be honored at the last home game of the season on Sunday, April 10 vs. Utah, with tickets available to purchase here.