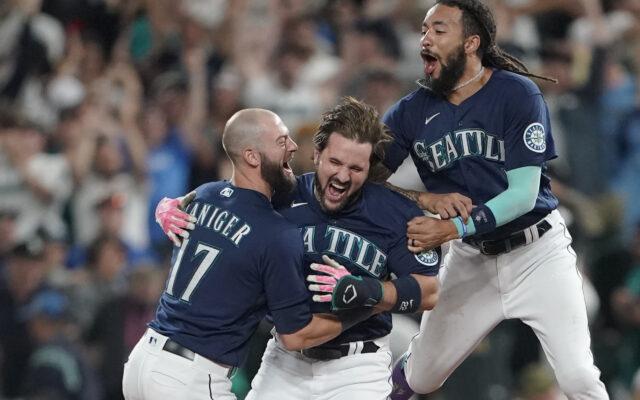 After four hours of dominant pitching, some bad baserunning and smooth defense, Luis Torrens and the Seattle Mariners finally broke through.

Torrens singled with one out in the 13th inning to score Eugenio Suárez, and the Mariners beat the New York Yankees 1-0 on Tuesday night in a game dominated by the starting pitching of Gerrit Cole and Luis Castillo. The two aces were on point into the late innings before turning it over to bullpens that managed to keep the game scoreless late into the night.

The lack of runs left Castillo and Cole out of the decision on a night when both deserved the win. Cole allowed four hits and struck out eight in seven innings — after being rocked for six runs in the first inning less than a week ago against Seattle.

Castillo allowed three hits and struck out seven in eight innings and bested Cole by finishing off the eighth and pitching out of trouble in the process. The right-hander got a groundout from Kiner-Falefa with a runner at third to end the inning.

Castillo was the first Mariners pitcher to throw eight innings this season. It was his third start against the Yankees in the past month. In the three outings combined, Castillo has thrown 21 2/3 innings, allowed four earned runs and struck out 23.

“That had the look of two aces going at it,” Yankees manager Aaron Boone said. “I actually thought against the starters both teams took a bunch of tough at-bats.”

“That was the coolest game I’ve ever been a part of,” said Seattle reliever Matt Brash. “Obviously, I’m new in the big leagues, but I mean, that atmosphere is what we want.”

Brash (3-3) threw two innings to get the win. Seattle’s bullpen combined for five hitless innings with seven strikeouts. In the 12th, Brash made an incredible behind-the-back grab of Isiah Kiner-Falefa’s grounder and caught Jose Trevino in a rundown between second and third. Kiner-Falefa was thrown out trying to advance to second on the play.