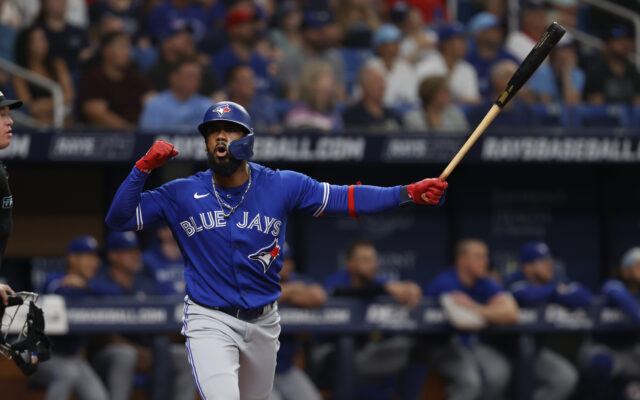 Toronto Blue Jays' Teoscar Hernandez reacts while batting during a baseball game Sept. 24, 2022, in St. Petersburg, Fla. The Seattle Mariners made one of the first big moves of the offseason by acquiring All-Star outfielder Teoscar Hernandez from the Blue Jays in exchange for two pitchers on Wednesday, Nov. 16, 2022. (AP Photo/Scott Audette)

The Seattle Mariners reached the postseason for the first time in 21 years last season, but realized they need another big bat if they hope to contend against the likes of the Houston Astros.

They addressed that need on Wednesday, acquiring slugger Teoscar Hernandez from the Blue Jays in exchange for two pitchers.

The Blue Jays made Hernandez available based on his contract. He is due to hit free agency after the 2023 season and is expected to make around $14 million in arbitration.

Macko, who turns 22 in December, struck out 60 over 38⅓ innings in High-A this year. The Mariners selected him in the seventh round of the 2019 draft.