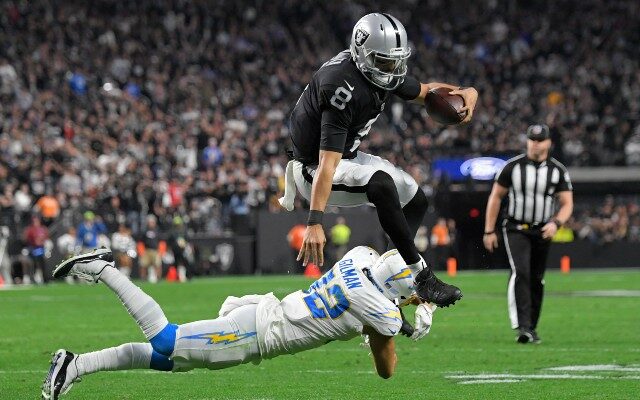 Oregon Ducks legend and Heisman winner Marcus Mariota is reportedly on his way to to his third NFL stop.

The Atlanta Falcons are signing Mariota to a two-year contract, hours after dealing longtime starter Matt Ryan to the Indianapolis Colts for a third-round pick.

Falcons agree to terms on a two-year contract with QB Marcus Mariota. pic.twitter.com/qWVdlJSlxd

In Atlanta, Mariota will reunite with head coach Arthur Smith, who was an assistant on the Tennessee Titans offensive coaching staff during Mariota’s time in Nashville from 2014-19.  Smith was a tight ends coach before becoming offensive coordinator in Mariota’s final season in Tennessee in 2019 when Ryan Tannehill took over as the full-time starter.

Mariota has spent the last two seasons backing up Derek Carr in Las Vegas, while he played in 11 games but never made a start.  He has made 61 NFL starts, all with the Titans, with a record of 29-32.