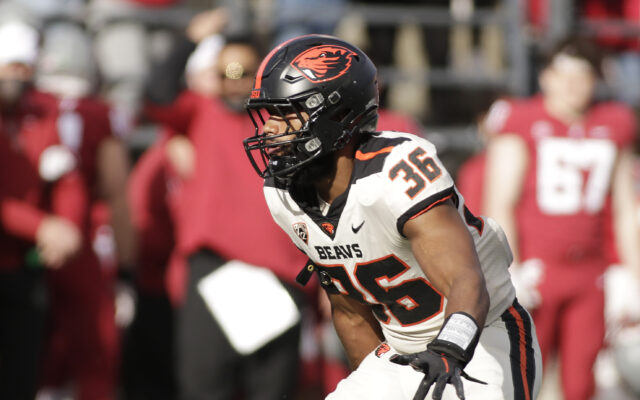 Oregon State offensive lineman Marco Brewer has been named to the watch list for the Outland Trophy and inside linebacker Omar Speights has been selected to the Bronko Nagurski Trophy watch list. Both watch lists were announced on Tuesday.

Brewer, a Corvallis, Ore., native, played in 11 games for the Beavers in 2021, making five starts. He was part of an offensive line that paved the way for B.J. Baylor to rush for a Pac-12-best 1,337 yards. That offensive line was also recognized as a finalist for the prestigious Joe Moore Award.

The Outland Trophy is given annually to the nation’s top interior lineman. A total of 89 players are on the initial watch list.

Speights, a Philadelphia native, has played in 32 career games for the Beavers, starting in 25. He’s accumulated 225 tackles with 17 tackles for loss and 5.5 sacks during his career. He was honorable mention All-Pac-12 in 2021 after totaling 89 tackles, with five TFLs, in 13 games.

Speights is one of 85 players on the Bronko Nagurski Trophy watch list. The honor is given annually to the nation’s defensive player of the year.

The Beavers open the 2022 season Sept. 3 when hosting Boise State at Reser Stadium. Kickoff is slated for 7:30 p.m. PT.