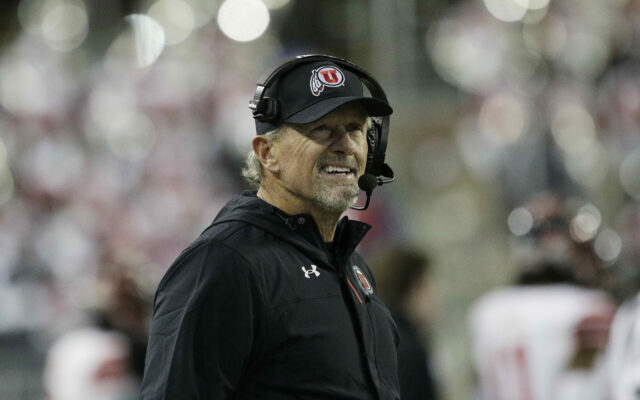 Utah head coach Kyle Whittingham watches from the sideline during the second half of an NCAA college football game against Washington State, Thursday, Oct. 27, 2022, in Pullman, Wash. (AP Photo/Young Kwak)

It has been an up and down year for the Utah football team, but there remains a path to get to Vegas to defend their Pac-12 championship.

The Utes are No. 14 in the first College Football Playoff rankings.  They dropped a tough season-opening game at Florida, and lost in Week 7 at UCLA, winning every other game.

November 19th, the Utes visit Autzen Stadium and the Oregon Ducks, a game Duck fans have circled on their calendars since the off-season.  That Eugene visit is by far the toughest remaining game on Utah’s schedule, with home games preceding it against Arizona and Stanford, and a road trip to Boulder in the regular-season finale.

Josh Newman of the Salt Lake Tribune joined the BFT with John Canzano (Weekdays 3-6 p.m.) to give his perspective on the Utes entering the home stretch, their health as a program including the availability of quarterback Cam Rising and running back Tavion Thomas, and why the team should not overlook the Arizona Wildcats on Saturday.

Listen to the full interview below: