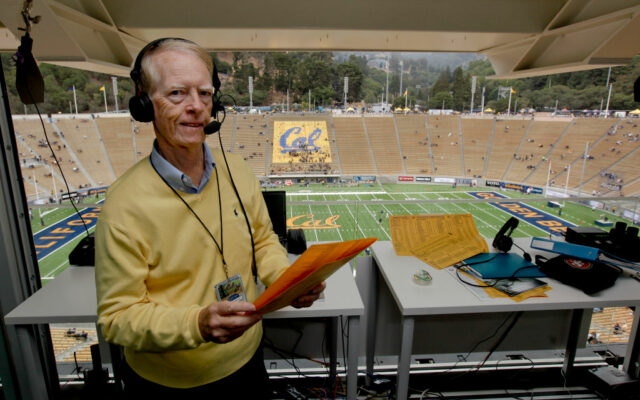 The voice of the Cal Bears, football announcer Joe Starkey at his broadcast position in the newly renovated Memorial Stadium on Saturday September 1, 2012, in Berkeley, Calif. (Photo By Michael Macor/The San Francisco Chronicle via Getty Images)

Joe Starkey has quite a story, both prior to and during his legendary career as a play-by-play voice of the California Golden Bears and San Francisco 49ers.

Starkey is in his final season behind the mic for the Golden Bears, which means Saturday is his last time calling the epic rivalry between Cal and Stanford, dubbed ‘The Big Game’.

Of course, no Big Game can surpass the drama of the 1982 affair, where Cal used a series of laterals to return the game’s final play for a kick return touchdown while the Stanford band came on the field.

Starkey joined Friday’s Bald Faced Truth with John Canzano to reminisce on his remarkable career, the nature of calling that 1982 finish, and if he will miss calling games in retirement.