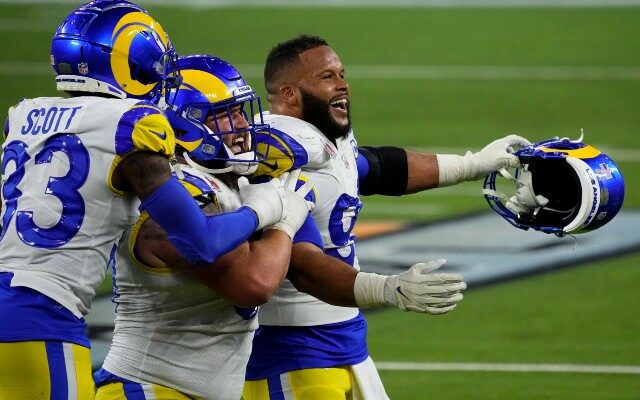 The Rams biggest stars made the biggest plays in the biggest moments of Super Bowl 56, and that recipe brought the city of Los Angeles another major sports title.

Aaron Donald is a Super Bowl Champion.  As is Matthew Stafford.  As is Cooper Kupp, who won game MVP honors.  As is Odell Beckham, Jr., who left the game in the second quarter with a knee injury and did not return.

Stafford threw three touchdowns and two picks, with a duo of scoring strikes to Kupp including the one that stood as the game-winner with a minute and a half remaining.

Cincinnati hit a go-ahead touchdown early in the third quarter with Burrow hitting Tee Higgins for 75 yards on a route that beat Jalen Ramsey, though replays clearly showed Higgins pulling down Ramsey’s facemask to create separation that led to the catch and run.

Stafford was picked the following drive by Cincinnati, and the Bengals cashed in a field goal to take a 20-13 lead, still early in the third quarter.

Both defenses flexed their muscle the majority of the second half, with the Rams getting within 20-16.  Stafford took over with a little over five minutes left.  Kupp converted a fourth-and-one with a WR sprint end around, and made a handful of big catches down the stretch to get within scoring range.  He caught the apparent go-ahead touchdown but it was nullified by off-setting penalties.  Then a defensive holding penalty on third-and-goal from the nine gave the Rams new life, and they capitalized with Stafford hitting Kupp on a back-shoulder ball from one-yard out, giving LA the 23-20 lead.

Burrow hit Ja’Marr Chase early on the final drive to get this kick-started, but Cincy stalled on 3rd-&-1 with Samaje Perine getting stuffed for no gain by Greg Gaines and Aaron Donald.  Then Donald wrecked Cincy’s 4th-&-1 effort with a pressure of Burrow to force the game-clinching turnover on downs.